Credit unions must pay another levy next year 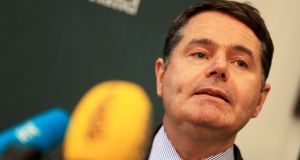 The Minister for Finance Paschal Donohoe has committed to another review of the levy.

Credit unions will have to pay a fifth stabilisation levy contribution next year under regulations signed into law by the Minister for Finance Paschal Donohoe.

The stabilisation fund was set up in the wake of the financial crisis as a backstop for credit unions that need financial support or aid to maintain their reserves.

The scheme aims to build up a fund of €30 million over 10 years. So far it has amassed just under €10 million. The levy and the amount that it raises will be reviewed after three years.

The outcome of the first review last year was to reduce the rate of the levy (from 0.022 per cent to 0.017 per cent of total assets ) while still meeting the original target of €30 million over a ten-year period due to growth in assets for the sector.

Mr Donohoe has committed to a review of the levy again before the introduction of the 2021 levy.

The introduction of the stabilisation scheme was one of the recommendations of the Commission on Credit Unions which also advised that the scheme be funded by mandatory contributions from credit unions.

To be eligible for consideration for stabilisation support, a credit union must have a regulatory reserve ratio equal to or greater than 7.5 per cent of the credit union’s total assets and less than 10 per cent and must in the opinion of the Central Bank be viable as a credit union.