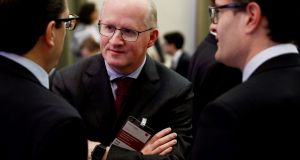 Central Bank governor Philip Lane noted that there were no “structural barriers” to entry into the Irish banking market for foreign institutions. Photograph: MARISCAL/EPA

Unification of Europe’s banking system would create an opportunity for more foreign banks to enter the Irish market and allow for a reduction in interest rates, Central Bank of Ireland governor Philip Lane has said.

Responding to remarks from European Central Bank president Mario Draghi on Thursday, Mr Lane said the concentration of business lending in a small number of banks meant “pricing pressure is going to be less”.

At an Oireachtas committee, Mr Draghi said mortgage rates were higher in the Republic than in other European Union countries because of a “quasi-monopoly” among Irish banks and too many problem loans.

AIB and Bank of Ireland now control about 60 per cent of the State’s mortgage market, following the exit of overseas lenders such as Bank of Scotland and Dankse Bank and the liquidation of Irish Nationwide Building Society.

However, the average Irish standard variable mortgage rate available to homebuyers stands at 3.15 per cent in August, compared with 1.77 per cent across the wider euro area, according to Central Bank figures.

Speaking at an event organised by the Dublin Chamber of Commerce on Friday, Mr Lane flagged that the problem extended to small businesses.

“It’s clear the cost of bank lending to small firms here is high compared to the rest of the euro area,” he said. “We now have a situation where the three largest banks have a market share of 93 per cent in new SME loans. When you think about any market [in which] only three firms have so much market presence the pricing pressure is going to be less.”

While he flagged a litany of issues in the system, he noted that there were no “structural barriers” to entry for foreign institutions. The question for those planning to enter the Irish market is whether the market is attractive enough, he said, and “that’s about establishing Ireland as a stable economy and predictable in the legal environment, tax and so on”.

One threat to that stability is Brexit, which could affect even those companies that don’t export to the UK, Mr Lane said.

“Financial stability risks arise from direct exposures to the UK market but there are also indirect exposures. For instance, many firms in Ireland are vulnerable to interruptions in international supply chains and increased competition from UK firms in the event of a further sharp fall in sterling.”