Despite protests by investors, a decade after bailout banks still need push to do right thing 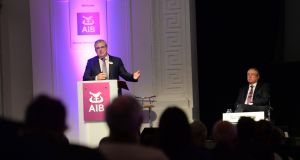 AIB chief executive Bernard Byrne and chairman Richard Pym: bank proposal entitled up to 100 senior executives to bonuses of up to 100 per cent of their salary. Photograph: Dara Mac Dónaill

Minister for Finance Paschal Donohoe was beaming when he took to the steps outside his department at midday on the second-last Friday of last June. Just days after succeeding Michael Noonan in the role, Donohoe declared the sale of an initial stake in AIB to stock market investors as a “significant milestone” – and said that he’d be courting the mainly overseas funds again in the future as he looks to recouping all the bank’s €20.8 billion bailout.

Less than 10 months later, a chasm has emerged between the Minister and those new investors, who paid €3.8 billion for a 28.8 per cent stake in AIB.

On Wednesday, Donohoe used the State’s remaining 71 per cent interest in AIB to vote against a proposal that the bank start a deferred share incentive plan next year. The proposal entitled up to 100 senior executives to bonuses of up to 100 per cent of the size of their salary, exercisable in three to five years.

However, 99.8 per cent of the new shareholders that took part in the poll, at AIB’s first annual general meeting (agm) since it returned to the main Dublin and London stock markets last year, backed the proposal.

“The Minister, in voting against the proposal, acted as a stakeholder who has to take political considerations into account, rather than a shareholder,” said a fund manager who bought AIB shares at the time of the bank’s initial public offering (IPO) last year.

While the resolution was advisory and non-binding, it was already dead on arrival at the agm, as Donohoe signalled his opposition last week and decided to put the vexed issue of remuneration across bailed-out banks out to consultation.

“I’m very clear that any changes in relation to compensation for the banking sector will have to be led by the Government,” Donohoe told reporters at the time. “This is a sector that has received extraordinary support from the Irish taxpayer.”

Donohoe didn’t have to use his vote to shoot down a bonus plan. After all, any such scheme at a bailed-out lender would still have to be approved by the Minister. In addition, the 2011 Finance Act imposes an effective 89 per cent “super tax” on incentive pay in the sector.

But Government sources said that the Minister felt the need to get ahead of the issue, for fear that it could destabilise an already-fragile minority administration.

“The emotion over the issue of banker bonuses can be understood, given the hardships that people faced during the crisis – and many still feel. Also, people quickly associate variable pay with a promotion of risk-taking,” said Stephen Lyons, an analyst with stockbroking firm Davy. “However, AIB’s proposed scheme represents a measured reintroduction of variable pay.”

As investors in Irish banks have grappled in recent times with rising capital requirements, regulatory costs and, up until this year, shrinking loan books as borrowers repaid loans at a faster pace than taking on fresh debt – or being facilitated in doing so – they’ve also been spooked of late by rising political interference in the industry.

A move by Fianna Fáil to empower the Central Bank to cap variable mortgage rates passed an initial Dáil vote weeks after the current minority Government took power in May 2016, though that Bill has since failed to progress through the Oireachtas.

Bank shares were dented in March when it emerged that the Oireachtas Committee of Public Accounts (PAC) planned to recommend that banks be curtailed from using crisis-era losses to ensure they paid no corporate taxes over the long term.

The Minister has since poured cold water on this proposal.

Also this year, as bailed-out lenders AIB and Permanent TSB accelerated loan disposals under pressure from the European Central Bank (ECB) to lower their high levels of non-performing loans (NPLs), Fianna Fáil introduced a Bill that would ensure that overseas buyers – or so-called vulture funds – lining up to buy such portfolios are regulated by the Central Bank. Currently, only the service providers managing the loan on behalf of the owners fall under the watch of Irish regulators.

“The level of inquiry around the political situation in Ireland is higher than it would have been,” AIB chief executive Bernard Byrne told reporters when asked after the agm whether investors are concerned about political intervention. “That’s consistent with the level of conversation and discussion that’s taking place that we can all see.”

Investors and bankers argue that political meddling in banking will ultimately delay the recovery of the sector and the prospects of the State maximising its recovery on €64 billion pumped into the country’s banks during the financial crisis.

However, politicians are sitting on clear evidence that Irish bankers still have to be pushed into doing the right thing almost a decade after the Government stepped in to save the industry from collapse.

It emerged this week that the number of homeowners and buy-to-let borrowers impacted by a sector-wide tracker mortgage scandal has topped 37,000, almost treble the amount acknowledged by banks last September. Another 3,400 cases have been conceded by the banks in the past four months.

The increase in cases – where borrowers were either denied their right to low-cost mortgages linked to the ECB’s main rate or charged a higher rate than they should have been on – was down mainly to a wave of political pressure, public uproar and Central Bank scrutiny in the meantime.

The ECB’s top banking regulator, Daniele Nouy, who happened to be in Dublin this week, waded into the bonus debate, telling RTÉ news in an interview: “Is this the moment right now to think about bonuses when you still have work to do on your balance sheet, to clean the balance sheet before the next crisis? Definitely not, in my view.”

Glass Lewis, one such proxy advisory firm, recommended that its clients vote in favour of AIB’s deferred stock plan, saying: “We generally believe that a majority of compensation should be performance-based, so as to promote alignment between executives’ and shareholders’ interests.”

While AIB had given limited details on the performance targets its executives would have been held to under its proposed scheme, the bank did highlight that it would be tied to the recovery of taxpayer funds.

The bank’s chairman, Richard Pym, reminded investors at the agm that it had warned in documentation published ahead of the June IPO about the “elevated risks” associated with its executive remuneration policy, especially as local banks face growing competition for talent from firms expanding in Dublin as a result of Brexit.

Byrne, Duffy’s successor at AIB, received €500,000 in salary, at the top end of that allowed under current restrictions, and €100,000 of pension benefits last year

Pym said the plan, which is about establishing a level playing field for local banks, was drawn up in line with best-practice guidelines issued by the European Banking Authority (EBA) last year.

AIB says it has lost 20 senior executives in the past five years, including its former chief executive, David Duffy, who quit in 2015 and last year enjoyed remuneration of more than £2 million (€2.3 million) as head of CYBG, the owner of Cydesdale and Yorkshire banks.

Byrne, Duffy’s successor at AIB, received €500,000 in salary, at the top end of that allowed under current restrictions, and €100,000 of pension benefits last year. While it was a multiple of the average €55,933 salary of the bank’s 10,137 staff last year, Glass Lewis concurred with AIB’s remuneration committee that executive compensation is “extremely low” for a bank of its size.

Darren McKinley, a senior equity analyst at Merrion Capital, said that while incentive plans have their place, they need to be “tied to quality of performance and not just quantity”.

“A large proportion of bonuses should be tied to long-term profitability of the company so that incentives are not awarded for loans issued now which later default,” he said.

With AIB’s 11 board members holding less than €350,000 of shares between them, Pym said “the very strong political control over certain aspects” of the bank is a “very valid” reason for some directors to maintain limited holdings.

Back at Davy, Lyons says that the noise surrounding bonuses has taken the shine off of a strong trading statement from AIB this week, which showed that the bank’s gross loan book has started to grow for the first time since the onset of the crisis, with new lending in Ireland surging by 18 per cent in the first quarter.

The update also showed that the bank continued to make headway cutting its level of bad debt, with its so-called non-performing exposures, comprised of impaired loans and those that have been restructured but on a probationary period, falling by €1 billion in the first three months of the year to €9.3 billion.

“AIB actually had a decent quarterly update, with supportive loan growth,” says Lyons. “But most of the day’s headlines were instead focused on the agm and the remuneration scheme.”

1 Coronavirus: We must save lives but we also need to live
2 Avoca warns of redundancies due to coronavirus
3 Grounded Aer Lingus pilots develop fix for turnaround glitches
4 Taxi app Free Now blames ‘technical issues’ for driver payment delays
5 Moving in and out of lockdown is a recipe for economic disaster
6 Non-executive directors face new paradigm in the boardroom
7 Companies without tax clearance shut out of Covid wage subsidy
8 Ulster Bank tells customers in error they cannot extend payment breaks
9 Ufurnish: ‘It’s like Skyscanner, but for furniture’
10 Hozier and Taylor Swift lift Universal Music Ireland’s sales to €20m in 2019
Real news has value SUBSCRIBE