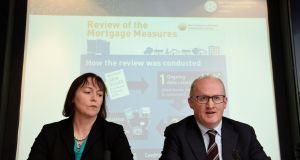 A letter from the Italian chairman of the European Parliament’s Committee on Economic and Monetary Affairs, Roberto Gualtieri, to the Italian president of the European Central Bank, Mario Draghi, highlighting the “stronger experience” of an Italian candidate, Andrea Enrea, for the top euro zone banking watchdog job caused something of a political storm hours before it emerged on Wednesday that he had beaten Ireland’s Sharon Donnery to the job.

Gualtieri wrote on October 23rd (after committee had grilled both candidates) that those plugging for Donnery to become the next chair of the ECB Single Supervisory Mechanism (SSM) had highlighted “the importance of ensuring gender balance and promoting female candidates”.

However, three members of the influential committee sent an urgent email to Draghi on Tuesday evening, before an ECB governing council vote on the matter, taking issue that the positive views on Donnery had been summarised around the fact that she was female.

The trio – Markus Feber of the European People’s Party, Green member Sven Giegold and the UK Conservative Party’s Kay Swinburne – said they were “convinced” Donnery’s experience as the Irish Central Bank’s alternate member of the supervisory board of the SSM, chair of the SSM group seeking to tackle banks’ problem loans and chair of the ECB Budget Committee afforded her the skills and knowledge for the job.

Gualtieri shot back on Wednesday, saying his colleagues’ intervention was “inappropriate” and that his letter to Draghi on behalf of the group “was agreed by co-ordinators representing 85 per cent of the committee”.

While Donnery (46) was initially reported by international media outlets as the frontrunner, momentum was said to be moving towards Enria, the long-standing head of the European Banking Authority, in recent weeks.

But Donnery has done herself no harm by showing her ambition and throwing her hat in the ring. Her defeat in the final round for a top ECB banking job makes Philip Lane all but a shoo-in for an ECB executive board position that comes up for grabs early next year.

It also makes Donnery odds-on favourite to succeed him.