Fingleton in no rush as Irish Nationwide inquiry drags on 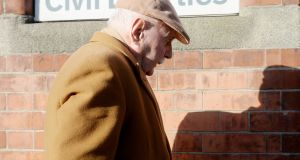 German banking group Hypo Real Estate was one of the first to contact Michael Fingleton when the long-time Irish Nationwide Building Society (INBS) chief executive was finally able to put the lender on the market in early 2007.

Fingleton flew out to Munich to meet top Hypo executives that April, where, he has said, the German company agreed to buy INBS, subject to the then 69-year-old staying on as chairman and the small matter of due diligence being carried out on the deal.

It was to be a brief courtship. Hypo’s advisers informed Fingleton within weeks that the group had found another opportunity. The target: Dublin-based Depfa Bank, which would go on to almost collapse in September 2008 – a year after its takeover – as funding markets froze in the wake of the implosion of Wall Street investment bank Lehman Brothers.

“The Irish State conceivably missed a major bullet then,” Fingleton would say last December at the opening of an inquiry into a series of alleged breaches of financial law at INBS in the run-up to the financial crash. “The acquisition of Depfa by Hypo meant Germany became responsible for the regulation of the entity and thus its liabilities.”

Irish taxpayers were instead left on the hook for the meltdown of INBS during the financial crisis. The formerly lowly mortgage lender that turned into bankroller of choice to some of Ireland’s top boom-time developers would cost taxpayers €5.4 billion to rescue – more than half the size of its loan book, making it, proportionately, the biggest rescue of an Irish lender following the crash. (INBS would be folded into Irish Bank Resolution Corporation, formerly Anglo Irish Bank, in 2011, before the wider group was put into liquidation in early 2013.)

Fingleton came out fighting at the onset of the inquiry – which the Central Bank decided to establish in 2015, but which only started public hearings late last year after Fingleton failed in a legal bid to stop it going ahead.

In his opening statement in December, Fingleton argued that, were it not for “political treachery”, which delayed until 2006 legislative changes paving the way for INBS to be demutualised and put on the market, “neither me nor my colleagues would be here to answer” allegations around regulatory breaches.

Fingleton, who started off in charge of a five-man operation with an office on Camden Street in south central Dublin in 1971 and developed it into a firm with €16 billion of assets at its height in 2007, argued that it was clear even before the inquiry was established that the Central Bank were out to get him – “the big fish” – and that the regulator’s staff actively advised former colleagues to “dish the dirt” on the man who retired in early 2009.

“Whether based on fact, perception, rumour or hearsay, I note in most of the relevant interviews, the people repeatedly reverted to me,” he said. “I appear to be the main focus of the information-gathering process.”

While former top executives at Anglo Irish Bank and Irish Life & Permanent have been subject to criminal prosecutions following the implosion of the financial sector in 2008, the Central Bank has only sought to hold former INBS executives to account, Fingleton noted.

The investigation panel, led by chairwoman Marian Shanley, is looking into whether Fingleton and three other former INBS executives were involved in seven alleged regulatory breaches between July 2006 and September 2008, including that INBS allegedly failed to process loans in line with policies, obtain property security for commercial loans, get proper valuation reports on assets it was lending against, or establish credit risk policies for profit-share agreements with developers during the boom.

A fifth man, former INBS chairman Michael Walsh, reached a settlement with the regulator in February, in which he was fined €20,000 and banned from managing a regulated financial services firm for three years. He admitted his ultimate responsibility for certain breaches, even though he was never involved in INBS’s day-to-day management.

Walsh struck his accord during a six-week hiatus at the start of the year, when proceedings were delayed as Fingleton, who is defending himself and denies all of the allegations, went through a period of ill health as he turned 80.

Questioning of the 26 witnesses giving evidence in the first phase of the inquiry – concerned with the workings of the lender’s credit committee – dragged on until the end of June, as the panel elected to conduct half-day hearings, partly because of Fingleton’s condition.

A number of witnesses told the inquiry that the credit committee failed to live up to its terms of reference. These included that it review large loans in arrears and non-performing, management information systems (MIS) reports on sectoral concentration, credit review reports on top borrowers, as well as issues raised by internal and external auditors, outside advisers, or regulators.

While Fingleton has insisted that he was not part of the committee until the end of 2007, this was contradicted by several other witnesses and documents presented to the inquiry – which point to him being a member, albeit a non-attending one.

A partner with Deloitte, Colm McDonnell, who was asked to lead a review of INBS’s commercial lending in 2005, told the inquiry that he was “surprised” by how relaxed Fingleton was when presented with a number of negative findings the following February. These included that the credit committee did not always have a required quorum at meetings and approved loans above its €1 million sanctioning limit.

“If I brought this type of report to another organisation, they would have had a completely and utterly different response to it,” McDonnell said on May 28th. “Other clients would be somewhat embarrassed and certainly would have made an assertion to fix this problem, rather than ‘this is how we do things’.”

Fingleton was pulled up by the inquiry panel on occasion for interrupting witnesses he was cross-examining or for failing to provide property notice of documents he wished to use. He also, on occasion, lost his train of thought as he pursued a line of questioning. He was quick, however, to pick up on any inferences about his management style.

“I would have found my interactions with you would have been quite brief and terse,” the first witness to the inquiry, one-time home loans manager, Darragh Daly, said in response to a question from Fingleton, in late February.

“So, you had a negative view of myself?” Fingleton asked.

Daly responded: “That’s not what I said.”

At one stage, Brian O’Moore, a senior counsel assisting the inquiry, asked former INBS head of commercial lending and fellow accused, Tom McMenamin, if Fingleton was referred to internally as “the boss”.

“I’m glad Mr O’Moore didn’t ask you was that a term of affection,” he quipped.

Walsh spoke during his evidence in May of how his board had become increasingly frustrated with the two top executives – including then finance director Stan Purcell – before the crash regarding failures to address regulatory and auditors’ mounting concerns about compliance and controls. (Purcell is one of the four men subject to the inquiry.)

However, Walsh said he felt that supervisors’ increasing focus on compliance and corporate governance issues at INBS signalled to him at the time that the authority was “rewriting history” when it should have been focusing on problems facing the financial system in 2007 and 2008.

Walsh said that he “time and time [again] tried to get the regulator to wake up” to the larger liquidity issues facing lenders and that he informed regulators Patrick Neary and Con Horan, in a meeting in December 2007, of how he had instigated a move by INBS to stop lending at that stage, except in cases where the society had committed credit.

But, by then, the damage was done.

With hearings expected to last for at least two years, the Central Bank refused last month to disclose documents on the back of a Freedom of Information Act query from The Irish Times on the mounting multimillion-euro cost of the inquiry.

Meanwhile, Fingleton appeared to be in no rush getting on with the job of defence as the inquiry prepared to adjourn for the summer and its registrar, Marie Phelan, called for further oral submissions in September.

“That’s my holiday month,” said Fingleton, to which Phelan replied that “with the greatest of respect”, they would only take a week.

1 Who are Ireland’s 17 billionaires?
2 My father in a nursing home wants to gift me his house
3 Are there annual limits on inheritances or gifts to a child?
4 Ireland ranked second in Europe for data breach notifications
5 State-backed Finance Ireland weighs stock market flotation in 2020
6 Davos Diary: Chilly reception for Trump’s ‘prophets of doom’ speech
7 State subsidises public sector retirees to cover gap until State pension
8 Richer countries must do more to tackle climate change, Thunberg tells Davos
9 Long-hyped smart fridges will never run out of milk or data
10 Countries that fail to attract immigrants will lose out – Microsoft chief
Real news has value SUBSCRIBE