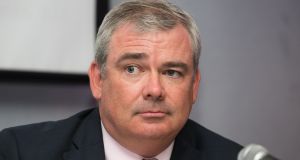 Ireland has ranked fifth among European states in terms of the ratio of non-performing loans (NPLs) held by its banks, according to a report by the European Banking Authority in London.

The analysis shows Ireland with an NPL ratio of just more than 20 per cent, ranking fifth behind Cyprus, Greece, Portugal and Slovenia.

Across the board, the rate was 5.4 per cent with Luxembourg the best in class with a figure of about 1.5 per cent.

In Ireland, the ratio was worst for the SME sector at 30 per cent, with large corporates at about 13 per cent and households at 15 per cent.

Ireland’s poor performance is clearly a factor of the crash of both the economy and property market from late 2008 onwards. The concentration of NPLs was one of the reasons why AIB and Bank of Ireland fared so badly in recent bank stress tests under the adverse scenario, in spite of both being back in profit and generating capital.

The EBA said that while there are signs of potential improvements across Europe in terms of dealing with NPLs, asset quality is still weak compared to historical figures and other regions.

In its report, the EBA said action on NPLs was needed, including supervisory actions, structural reforms and development of secondary markets.

AIB chief executive Bernard Byrne told the Oireachtas finance committee last week that NPLs were a major focus of its regulators at the European Central Bank in Frankfurt. He said AIB’s ratio was about 17.5 per cent.

The EBA also found that cyber attacks were on the rise and that banks are “struggling to demonstrate their ability to cope”.

“In this context, supervisory are focusing on IT-related risks including measures to fix rigid and outdated legacy IT systems, IT resilience, and governance and outsourcing,” it said.