Deutsche Bank to reduce its bonus pool by ‘almost 80%’ 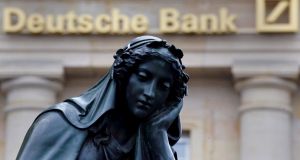 in Frankfurt Deutsche Bank has cut its 2016 bonus pool by “almost 80 per cent”, one of its top managers has said, as Germany’s biggest bank battles to shore up its financial position in the wake of heavy fines.

Karl von Rohr, chief administrative officer at Germany’s biggest bank, acknowledged in an interview with the Frankfurter Allgemeine Sonntagszeitung newspaper that bonus reductions were “frustrating” for staff, but said the decision had been taken “very consciously, also bearing in mind our shareholders”.

Deutsche’s investors have not received a dividend for the past two years, as the bank has slipped deep into the red, posting a record €6.8 billion net loss for 2015, and a €1.4 billion loss for 2016 amid a raft of litigation and restructuring charges.

In late December, the bank reached a $7.2 billion (€6.8 billion) deal with the US department of justice to settle allegations that it mis-sold mortgage-backed securities before the financial crisis, and in January it agreed to pay $630 million to settle US and UK investigations into alleged mirror trades used to launder $10 billion out of Russia.

In the wake of the settlement with the department, chief executive John Cryan said Deutsche’s management board had decided to waive their bonuses for 2016.

He also said employees with the titles vice-president, director and managing director would receive no individual bonuses for 2016, although they would still be eligible for a group-wide bonus linked to the bank’s overall performance.

Deutsche said in January the move would affect about 25 per cent of its staff but did not spell out how big the reduction to the bonus pool would be in monetary or percentage terms.

In 2015, the bank’s bonus pool was €2.4 billion. Precisely how much this number declines in 2016 will depend on share awards from previous years, as well as the cut in new awards mentioned by Mr von Rohr.

The cut in Deutsche’s bonus pool comes amid a broader debate over the level of executive pay in Germany, which is home to some of Europe’s biggest companies and is gearing up for a general election later this year.

The centre-left Social Democrats, which govern the country in coalition with Angela Merkel’s centre-right Christian Democrats, last week proposed draft legislation that would limit the tax deductibility of the salaries of top managers at public companies to €500,000.

On Friday, the carmaker Volkswagen, which came under fire last year after board members received big payouts despite the company suffering its worst ever financial year, said it would introduce a new pay system that would cap the salary of its chief executive at €10 million and limit other management board members’ pay to €5.5 million. – Copyright The Financial Times Limited 2017