Insurance fraudsters ‘should be sent to prison’ 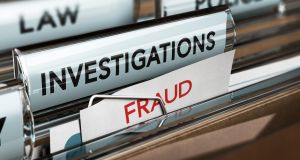 Insurance fraudsters in Ireland are “walking free from courts effectively with the message to spin the wheel again”.

Irish society’s growing acceptance and normalisation of insurance fraud is encouraging false and exaggerated claims and providing “an income supplement to the morally challenged”, according to the head of claims at the State’s largest public sector insurer.

Michael Whelehan, head of claims at the IPB Insurance, which covers public bodies, councils and the HSE, told a conference organised by Insurance Ireland yesterday that courts must not only throw out fabricated and inflated claims, but impose costs and prison sentences on fraudsters.

Insurance fraudsters in Ireland are “walking free from courts effectively with the message to spin the wheel again”, said Mr Whelehan, whose organisation paid out almost €113 million against claims last year.

“All I ask – and we as a society should demand – is that on the roulette wheel we can expect the existing law to be implemented with vigour,” said Mr Whelehan. “I think the roulette wheel must include costs, dismissals, fines and imprisonment as realistic propositions.”

Mr Whelehan said that if insurance fraud is not tackled “with more vigour” the cost to society of funding opportunistic fraud will increase.

“Local services will be constrained, leisure and amenities curtailed, funds diverted, and we will continue to fund the making of insurance claims and exaggerated insurance claims as an income supplement to the morally challenged,” he said.

The Personal Injuries Commission found last year that compensation for whiplash claims in Ireland were running at an average of €17,388, more than four times the rate in the UK. Insurers and consumer advocates argue that this is contributing to false and exaggerated claims.

The insurance industry faced political and public ire as motor premiums rose – according to Central Statistics Office data – by more than 70 per cent in the three years to late 2016. While motor coverage costs have since fallen by more than 20 per cent, public liability and employers’ liability premiums have been rising dramatically in recent times.

“Businesses are failing because of rising insurance costs”, Deirdre Carwood, a partner with Deloitte, told the conference.

Industry observers expect that a personal injury committee being set up under the Judicial Council Act, enacted in July, will issue guidelines as soon as next year that will lead to court awards falling and becoming more consistent. Insurance Ireland interim chief executive Gerry Hassett said that this, in turn, will bring down insurance premiums.

Chief Justice, Mr Justice Frank Clarke, said he has identified members of the committee in the hope that they will be able to “hit the ground running”.

The committee-designate includes judges from the High Court, Court of Appeals, as well as District and Circuit courts, Mr Justice Clarke said. A spokesman for the Courts Service of Ireland said he was not in a position to name the committee members.

The Chief Justice said the members of the committee will be able to start work in the meantime on benchmarking of personal injury awards against other jurisdictions.

Mr Justice Clarke did not say when the council will be set up. He said it is important it is established in a way that does not make it susceptible to “unnecessary legal challenge” which will slow the process.

“Today we got no timeline for when the work of the committee would be complete,” said Peter Boland, spokesman for the Alliance for Insurance Reform. “From policyholders’ perspective, progress appears unbearably slow.”