Row over financial company’s stated plans to create 1,500 jobs in the southeast 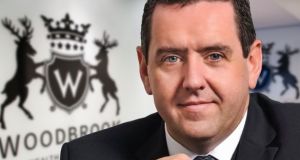 A row has broken out over a Cyprus-based financial services company’s stated plans to create 1,500 jobs in Waterford city and the southeast.

The chief executive of Waterford Council, Michael Walsh, said he has never believed in the plans revealed by financial services company Woodbrook Group last December, when its chief executive revealed a desire to base an Irish HQ in Waterford.

Michael Doherty, a native of Co Waterford who heads up the advisory firm, told media last year he would establish a life and health insurance company in the city as part of a €100 million investment, with the jobs created over four years.

However, speaking last Thursday, Mr Walsh told politicians: “Nobody ever spoke to me about that [the 1,500 jobs] at the time. I didn’t believe it at the time, and I still don’t believe it.”

He said he had heard “no word” regarding the project.

Despite Mr Walsh’s blunt dismissal, Mr Doherty has insisted that he is “committed” to basing a financial services company in Waterford. “Since I’m a Waterford man I’m committed to the project. We’re still fully committed.”

However, he admitted he was encountering “huge issues” including a regional housing shortage and delays to the multi-million euro redevelopment of the city’s North Quays, Waterford airport and a technological university for the southeast.

Mr Doherty, who has been cited as one of the most influential people in the global financial services sector by trade media, referred to the council’s reoccurring financial difficulties when asked about Mr Walsh’s remarks. “ What he says is immaterial to me.”

Mr Doherty said while the Woodbrook Group had not been in contact with the local authority it had held regular talks with Government departments and the IDA.

He added that the company, which has offices in up to nine countries, had been expanding its operations in Ireland, and would be employing a small IT office in Waterford early next year.

However, Mr Doherty said there were challenges in trying to attract companies to make the move to Waterford and the southeast.

“Another aspect is the university which is something that is really needed. Then you have the delay with the North Quays – they’re all stalling.”

“The southeast and Waterford need to get its act together. There are huge issues there, particularly if you’re looking at bringing a thousand jobs into the region.”

Mr Doherty told The Irish Times previously that the company would apply to the Central Bank for authorisation, but these plans are currently on hold as Woodbrook may purchase an Irish company already licensed to operate in the market.

1 Air travel never going ‘back to way it was’
2 Should I switch bank now with Ulster Bank at risk of closing?
3 BoI redundancies, ‘tax war’ warning for Ireland, and retailers in rent arrears
4 Bank of Ireland sees more than 1,400 staff apply for redundancy
5 Coronavirus vaccine: 15 billion doses needed to inoculate the planet
6 South Dublin land at €19m has scope for up to 500 homes
7 French investor acquires Cherrywood office investment for €27.7m
8 Will brother’s widow get half of our parents’ estate when they die?
9 O’Flynn Group in bid to build 1,137 homes on Dublin’s Naas Road
10 ‘Tax war’ will hit Ireland if digital tax talks fail, OECD says
Real news has value SUBSCRIBE