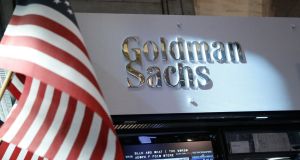 Goldman Sachs said last month it had not yet made any Brexit-related staffing decisions. Photograph: Reuters

Goldman Sachs is shuttering the London operations of its internal hedge fund, Goldman Sachs Investment Partners, closing a chapter in a fund that ranked as one of the biggest launches to date.

GSIP debuted in 2008 with total assets of $7 billion (€6.6bn), including $2 billion of Goldman’s own money. However, performance was patchy from the start, and a few years ago the bank began pulling money out of the fund to comply with the Dodd-Frank Act of 2010, part of which requires big banks to limit their investments in hedge and private equity funds.

About eight London-based employees were recently told to move to Goldman’s global headquarters in Manhattan, New York, or find a new job internally.

A person familiar with the reshuffle, which was first reported by Reuters, said it was triggered by the retirement of Nick Advani, a managing director who led the hedge fund from London and said last June he would be stepping down from his role.

Another managing director, Raluca Ragab, who had been leading the London-based team after Mr Advani stepped down, will leave Goldman once the move is complete.

Goldman said the reshuffle was not connected to the UK’s efforts to negotiate an exit from the EU, which has prompted many financial services groups to review their staffing in the country. “This is a discrete decision for reasons specific to GSIP, one investment team within Goldman Sachs, and shouldn’t be construed as anything but that,” said Goldman.

Last month Goldman said it had yet to make any decisions on staffing in the UK following the Brexit vote in June.

“It is obviously going to be a long process,” said Harvey Schwartz, chief financial officer, while presenting fourth-quarter earnings. “We’re kind of contingency planners by our very nature, so we’ll run through different alternatives...We’re going to see how this evolves over the next couple of years.” – (Copyright The Financial Times Limited 2017)

1 Ryanair wants Irish courts to block Skyscanner from selling its flights
2 Who are Ireland’s 17 billionaires?
3 Are there annual limits on inheritances or gifts to a child?
4 Fantasy figures: Why make election promises you can’t afford to keep?
5 Apple’s cash mountain, how it avoids tax, and the Irish link
6 How to . . . move (almost) everything to your new phone
7 Ireland has EU’s most progressive tax system, study finds
8 Are you a Monica, Joey or Chandler when it comes to your data privacy?
9 Budget 2020: New emissions tax on new cars and used imports
10 New offices to let in sought-after south Dublin suburb of Blackrock
Real news has value SUBSCRIBE