Central Bank estimates up to 15,000 borrowers hit by industry-wide overcharging 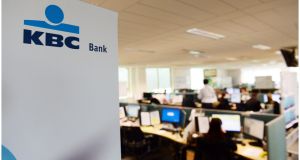 KBC has not revealed the number of tracker customers it has contacted. Photograph: Bryan O’Brien

Speaking to The Irish Times after the bank’s Belgian parent affirmed its commitment to the Irish market on Thursday, KBC Bank Ireland’s chief executive Wim Verbraeken said that the lender has “already started to reach out to customers that we know were not on the right rate to put that right”.

Mr Verbraeken declined to give the number of customers it had contacted, adding that it wants to provide a full statement in time on the matter “to close this chapter as quickly as possible”.

He said KBC and the Central Bank both want to complete the review “as soon as possible”, but couldn’t give a timeframe.

“We have booked a level of provision in 2016,” Mr Verbraeken said, when asked about the extent to which it has set aside money for redress, compensation and other costs relating to the matter, declining to give a figure.

The Central Bank governor, Philip Lane, indicated in December that up to 15,000 mortgage holders across a number of existing and former mortgage providers in the Republic were overcharged. Borrowers were typically caught out as banks failed to fulfil borrowers’ contractual entitlements to return to an ECB tracker rate after a period on a fixed rate.

Mr Lane said that about 100 borrowers across various institutions may have lost their homes as a result of the tracker mortgage scandal.