Commerzbank fourth-quarter results ahead of expectations 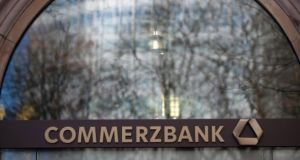 Commerzbank did not provide guidance for 2017 earnings, but says it aims to keep its cost base stable

Commerzbank beat quarterly profit forecasts on Thursday, lifting its shares in pre-market trade, but the German lender said it needed to do more to get back to sustainable growth. “We cannot yet be satisfied with the quality of our earnings,” chief executive Martin Zielke said in a statement.

Commerzbank’s shares rose 2.4 per cent to the top of Germany’s blue-chip index in pre-market trading.

Revenues were flat at €1.3 billion, in line with expectations, held back by low interest rates and weak loan demand from German companies.

Commerzbank did not provide guidance for 2017 earnings, but said it aimed to keep its cost base stable.

It expects to set aside the same amount of money as in 2016 to cover bad loans at its retail and corporate bank, but sees provisions for bad shipping loans rising to €450 million to €600 million. In 2016, it hiked group provisions by a third to €900 million, mainly due to its shipping industry exposure.

Operating earnings at Commerzbank’s cash-cow Mittelstandsbank unit, which caters to the German economy’s backbone of small and medium-sized companies, were up quarter-on-quarter as provisions fell.

The retail bank saw flat operating profit due to pressure on its deposits business, where negative interest rates weighed, despite cost-cuts and higher customer demand for mortgages. The bank announced in September it would cut more than a fifth of its workforce and suspend its dividend as it tackles the challenges of weak profits and a shift to online banking.