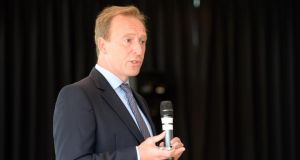 Mr McNamara received a termination payment of £280,100 (€330,142) when he departed IFG unexpectedly in September after two years with the Dublin-listed company, bringing his total remuneration for 2016 to £565,100.

EValue provides financial forecasting for more than 90 per cent of the UK’s main financial services companies and many investment advisers use its “proprietary asset-modelling and financial planning tools,” according to its website.

Mr McNamara is expected to drive revenue from the group’s technology for “robo-advice”, which has become a new buzzword in financial services in recent times. This essentially involves the replacing of face-to-face investment advice with online, automated guidance with minimal human intervention.

While IFG is probably best known in Ireland for its former mortgage brokerage business, the group is now essentially comprised of two UK businesses: James Hay, a provider of self-invested pension plans (SIPPs) in the UK; and Saunderson House, an investment adviser focused on professionals in the City of London.

Years of restructuring culminated in the sale in 2015 of its Irish pension and advisory business as well as its insurance unit.

Although IFG remains domiciled in Ireland and its shares are listed on the Dublin exchange, it moved its corporate headquarters to London last year.