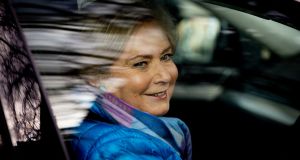 Frances Fitzgerald: “Credit ratings agencies have announced a large amount of rating downgrades for vulnerable companies and sovereigns in the wake of the coronavirus crisis”

European authorities responded to criticism that credit ratings agencies had failed to properly appreciate risks in complex financial instruments, companies and states before the 2008 crash by moving to regulate the sector.

Rules were also introduced to limit the number of times such firms could change their stance on sovereigns to three times a year as downgrades at unexpected times during the euro zone debt emergency was seen as amplifying the crisis.

Ms Fitzgerald, a member of the European Parliament’s influential Economic and Monetary Affairs Committee, wrote to Valdis Dombrovskis, the EU executive vice-president who oversees financial services, last week saying that the rate at which ratings firms were downgrading was fuelling the downturn.

“Credit ratings agencies have announced a large amount of rating downgrades for vulnerable companies and sovereigns in the wake of the coronavirus crisis. It has been estimated that March 2020 saw the fastest pace of rating downgrades on record since at least 2002, according to research by Bank of America,” Ms Fitzgerald said.

“There seems to be a clear procyclical element to the current downward trend in ratings. Following the financial crisis of 2008, the EU put in place regulation for credit rating agencies in order to prevent a repeat of mistakes. But it seems that this regulation has not been able to prevent procyclical trends in ratings.”

“Credit rating agencies can perform an effective role in the financial system, but when we get this kind of procyclicality serious questions must be raised about their role and responsibility.

There were fears in the bond markets last week that Moody’s was preparing to downgrade Italy’s debt rating to “junk” status as the firm had an opportunity on Friday under its sovereign ratings schedule to review its stance on the highly-indebted country. However, Moody’s decided to leave its rating at Baa3, one notch above junk territory.