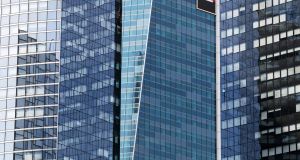 The Societe General tower located in the business district of La Defense in Nanterre on the outskirts of Paris. Photograph: Joel Saget via Getty Images

Societe Generale posted a surprise first-quarter loss on Thursday after hiking provisions for bad loans and suffering a revenue wipeout at its equity trading division amid market volatility caused by the coronavirus.

Sales from trading shares slumped 99 per cent to €9 million hit by cancelled dividends, increased hedging costs and a counterparty default, contributing to a €537 milion loss at the French lender’s corporate and investment bank.

The weak performance is in stark contrast to European banks, which on average posted a 20 per cent gain in share trading, according to analysts at Jefferies, and is a blow for chief executive Frederic Oudea, who has focused SocGen on equities and related derivatives.

SocGen is one of the biggest players in dividend futures and structured products, which are derivatives linked to shares and coprorate payouts – both of which have nosedived amid the coronavirus crisis.

Overall, SocGen said revenues fell 16.5 per cent in the first quarter to €5.17 billion, while its net loss amounted to €326 million versus a €686 million profit a year ago. Underlying net income was down 90.8 per cent to €98 million.

The bank hiked its provisions against loan losses to €820 million in the first quarter from €264 million a year earlier as it braced for coronavirus-led defaults and two fraud cases, it said.

“I’m not surprised by credit provisions because I think consensus was too optimistic, but the investment bank was really disappointing and two fraud cases certainly do not look good,” Jerome Legras, managing partner at Axiom Alternative Investments said.

Shares in the bank slid 5 per cent in early trade.

The bank, which has already been exiting less profitable businesses and has been cutting costs, said there would be an additional cost reduction of between €600 and €700 million in 2020. Mr Oudea said that bank was confident in the “the robustness of our capital and risk profile”. SocGen said on Wednesday it would publish its first quarter results the following day. It had originally been set to report on May 6th. – Reuters