Joe Brennan: Banks must be honest with themselves about what loans are unsustainable, make specific provisions and cut restructuring deals 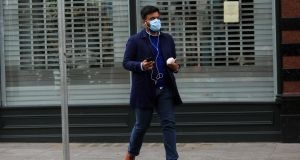 A pedestrian in Dublin’s shut-down city centre. Unlike during the last crisis, Irish banks have much higher levels of capital to absorb shock losses. Photograph: Gareth Chaney/Collins

Ireland’s banks, who were at the epicentre of financial crisis over a decade ago, may be relieved that they’re not the cause of the current economic turmoil. They must not be allowed to become part of the problem.

Confirmation on Thursday that the five mainstream banks and a group of other lenders will extend payment breaks to households and businesses affected by Covid-19 from three months to six will give all side breathing space to begin to get their heads around the scale of the unprecedented shock.

Borrowers behind more than 65,000 mortgages and 22,000 small- to medium-sized enterprise (SME) loans have already availed of the relief since it was first announced in the middle of last month. That equates to about 8 per cent of both all mortgages and SME loans in the country.

Borrowers will be relieved that the temporary breaks will not be counted against them by the Central Credit Register or the Irish Credit Bureau, leaving their credit scores intact.

However, banks and customers alike will have to face up during this period of respite to the fact that some loans will never be paid back in full.

Accounting rules during the last crisis largely prevented banks from setting aside bad debt provisions until loans had actually soured. This was used by lenders to engage in extend and pretend strategies to avoid facing up to the scale of the real problems in their books.

A new international accounting measure –known as IFRS 9 – that has been effective in Ireland since 2018 is designed to make sure banks start setting aside money to cover doubtful loans at an earlier stage.

Still, regulatory authorities in Europe have moved in the past six weeks to give banks additional flexibility in how they assess their bad loans situation. This allows banks to avoid classifying loans with temporary payment breaks as higher risk debt that banks would ordinarily have to start making provisions against.

But it’s essential that banks do not sweep problems under the carpet - both in terms of how they deal with their customers and their accounting.

On Friday, Ulster Bank became the first bank in the Republic to give a glimpse of the initial impact of Covid-19 on its books. The UK-owned bank took a general provision of €38 million to take account of “a more uncertain economic outlook” as well as an additional €12 million precautionary charge to take into account that there are no forecasting models out there to work out how the virus outbreak will play out.

Western economies may be trying to scale back restrictions, but who’s to know how consumers and businesses will behave as the virus remains an invisible enemy? World Health Organisation officials warned on Thursday countries must prepare for second and third waves of coronavirus until a vaccine is developed.

Goodbody Stockbrokers analyst Eamonn Hughes said that he had feared that the general Ulster Bank provisions figure “could have been significantly higher, though with so much uncertainty, that may still ultimately come to pass”.

Central Bank sources have told The Irish Times that they will press lenders to use extended Covid-19 loan payment breaks to work on and offer longer-term restructuring solutions to borrowers who will still be under financial pressure at the end of the period.

It is important that both sides avoid a “cliff-edge” at the end of six months in cases where households and businesses will not be in a position to resume payments, they said.

Banks must be honest with themselves about what loans are unsustainable, make specific provisions against them, and cut restructuring deals that will crystalise the losses.

Delays may prompt investors who fund banks to lose confidence and result in the sector amplifying the crisis. Putting off the evil day would also lead to a return of zombie households and businesses, burdened by too much debt, that cannot play a rule in an economic recovery.

Unlike the last crisis, Irish banks have much higher levels of capital to absorb shock losses. Their reserves compare favourably to peers elsewhere in Europe, especially when you look at them against total assets. Banks in the State are required by regulators, as a legacy of the property crash, to hold €50 of capital against every €1,000 of mortgage lending, compared with an EU average of €16.

But before banks start up their loan restructuring machines again, it’s important to find out what additional supports the Government is working on. Officials are known to be looking at enhanced SME guarantee schemes, open-ended grants, and cases for equity capital support as it plans for the next stage in the economic battle.

The UK bowed on Monday to pressure to offer full guarantees for emergency loans of up to £50,000 (€57,375) for small companies hit by the Covid-19 shock. Loans between this amount and £5 million will remain subject to an 80 per cent guarantee announced last month. Germany and Switzerland have introduced schemes offering full state guarantees for loans to SMEs.

SMEs accounted for more than two-thirds of the Irish workforce before the crisis and have been at the coalface as the economy has gone into lockdown. There are currently almost 600,000 people relying on Covid-19 unemployment benefits, while almost 430,000 workers have received at least one payment under the Government’s temporary wage subsidy.

A Banking & Payments Federation Ireland paper this week called the Government to adopt a similar SME loans guarantee scheme to the UK, estimating that the industry, construction, distribution and services sectors face a funding requirement of as much €8 billion.

There will be many businesses for whom taking on additional debt is not the answer. The last thing we need is for banks to lend recklessly. But State supports for SMEs may make borderline cases more bankable and, in turn, help reboot employment and the economy.

More than a decade after the crash, banks face their biggest test.