Worth of payments up but transactions declines, says banking and payments group 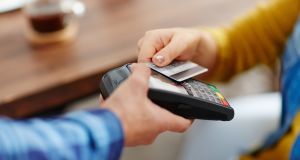 The data includes payments made via mobile wallets, such as Apple Pay or Google Pay. Photograph: iStock

Consumers used their plastic less for contactless payments in the second quarter but the amount they spent increased.

The impact of Covid-19, during which retailers were less interested in cash payments and the decision to increase the tap-and-go limit to €50 from €30, meant shoppers spent €1.9 billion in contactless credit and debit card payments over the three months to the end of June. But the actual number of transactions dropped to 123 million, the lowest in 15 months.

The data includes payments made via mobile wallets, such as Apple Pay or Google Pay.

The average payment value jumped from €12.51 in March to €15.57 in June, according to the figures from the Banking and Payments Federation of Ireland (BPFI).

“Now more than ever consumers want fast, simple and secure payments and this is reflected in today’s figures which show strong Q2 [second quarter] growth in the value of contactless payments,” said BPFI chief executive Brian Hayes. “It is likely this growth is in part a result of the increase in the contactless limit to €50.”

Debit cards account for 94 per cent of the value of contactless payments.

“We would expect contactless payments to continue to grow in the months ahead in line with consumer spending,” said Mr Hayes.