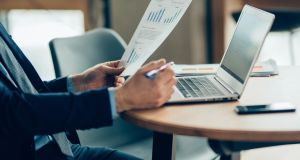 Kerry-based financial services Fexco reported on Wednesday its operating profit rose by 9.5 per cent to €17.5 million last year, with income growing across all divisions of the group, which specialises in payments and foreign exchange.

“We continue to reinvest in our core business, and to drive growth through innovation and acquisitions to expand our position as a global fintech business,” said chief executive Denis McCarthy. “We retain a strong and conservatively managed balance sheet that means we have the capability to pursue further growth opportunities when they arise.”

The results come as Fexco is in the middle of fresh talks to sell its 51 per cent stake in Goodbody Stockbrokers, having acquired an initial 75 per cent stake in the Dublin-based securities firm from AIB in 2011 in a deal worth €24 million. Goodbody management and staff have since increased their holding to 49 per cent under an incentive scheme tied to that deal.

Fexco and Goodbody management are currently weighing bids from rival brokerage firm Davy, Irish Life and Bank of China for the business, after an agreement to sell the business to a Chinese consortium last year for €150 million fell through earlier this year.

Fexco, based in Killorglin, Co Kerry, employs more than 2,400 people and plans to open a new research and innovation centre in the global headquarters early next year.

Recent developments at the company have seen it launch Metamo, a 50:50 joint venture between 16 of Ireland’s largest credit unions and Fexco, in July. Metamo will support credit union viability and sustainability through the provision of a modernised suite of financial products.

In March, an agreement was reached with the Aviation Working Group (AWG) for Fexco to develop and operate the global electronic aviation trading system e-ledger (GATS) for the aircraft leasing and financing industry to simplify the business of selling aircraft which are subject to lease agreements.

Fexco’s key retail foreign exchange business now manages 150 branches and a further 900 agency and franchise locations, following the acquisition of Thomas Exchange Group in August 2018. The company has further growth ambitions for this business which it will achieve through the establishment of new strategic partnerships, it said.

The lockdown was overkill but justifiable in an information vacuum

1 Brother is dragging his heels as executor of uncle’s will - is there anything I can do?
2 Irish whiskey sales near milestone of 12m cases a year
3 The lockdown was overkill but justifiable in an information vacuum
4 Stocktake: Has Warren Buffett lost the magic touch?
5 Should my mam wait for house prices to drop before buying?
6 Deloitte expands into cloud computing with deal for DNM
7 Global stocks climb near three-month highs as rebound hopes grow
8 Apple tax case: Four individual lawyers paid over €500,000 each
9 What incentives are on offer for first-time home buyers?
10 Parts of Brown Thomas and Arnotts to reopen next week
Real news has value SUBSCRIBE