Was a central witness in Dirt tax-avoidance scheme 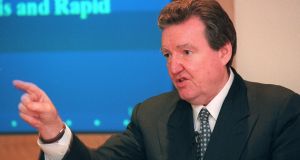 Tony Spollen in 1998. He left AIB in 1991 to set up is own consultancy. He also served on a number of company and State boards.

Tony Spollen, consultant, former AIB internal auditor and a key figure in an inquiry into Irish banks’ use of bogus non-resident accounts, has died.

Mr Spollen (73) died peacefully at home over the weekend. An accountant and well-known figure in Irish business, he was a central witness in an inquiry into Irish banks’ use of bogus overseas accounts to avoid deposit interest retention tax (Dirt) 20 years ago.

When he was head of AIB’s internal audit in 1991, Mr Spollen warned the bank that it faced a potential IR£100 million (€127 million) liability as a result of this practice.

Several years later his memo was leaked to the media, ultimately sparking an inquiry by the Dáil’s Public Accounts Committee into all Irish banks.

Mr Spollen left AIB in 1991 to set up is own consultancy. He also served on a number of company and State boards.

He is survived by his wife, Gina, children Tonia, Garfield, Virginia and Davin, and six grandchildren. His funeral takes place on Wednesday at the Church of the Sacred Heart, Donnybrook.