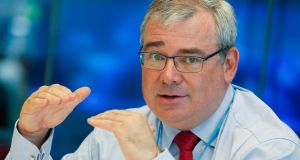 For once it might have paid off for an Irish finance minister to listen to a banker.

Last December, AIB chief executive Bernard Byrne told the Oireachtas Finance Committee that it was looking like a good time for the Government to sell further shares in the bank.

“I can’t tell you what will happen next in terms of valuations,” Byrne said. “So, I would encourage people to look at selling down at this point in time.”

However, buoyant global equity markets at the end of 2017 and in the first month of this year have given way to concerns over the outlook for the world economy. We have trade tensions between the United States and, well, take your pick, as well as growing fears that central banks will make a misstep as they rein in stimulus programmes after almost a decade of unprecedented easy-money policies.

On the anniversary today of AIB’s return to the main Dublin and London markets, the stock is trading 10 per cent above on its initial public offering (IPO) price, but 16 per cent off its January peak. Still, the stock is hugging a level that Minister for Finance Paschal Donohoe could just about use to justify a further sale. (The shares are trading at one times what AIB values its assets, or what is known as book value.)

Back before the Oireachtas Finance Committee this week, Byrne shared how he often has to calm down his overseas shareholders rattled by the latest headlines from Ireland.

They had plenty to wade through in the past year, from political resistance to non-performing loan sales to so-called vulture funds, to a proposal by another Oireachtas committee that banks should be curtailed from using losses built up during the financial crisis to slash their tax bills over the long term.

Donohoe quickly shot down the latter idea, so 71 per cent State-owned AIB can look forward to paying no corporate tax for the next 17 or 18 years. But he did threaten last October that he could use his bank shares to become a thorn in lenders’ sides at annual general meetings (agm), if they failed to properly address the tracker-mortgage crisis.

When a committee member suggested Byrne surely didn’t mean politicians like them, he quipped: “I didn’t not mean you.”

However, he said that he has told investors the noise is “a good thing”, as there is a strong social cohesion in Ireland because of the size of the country, where “we talk about everything”.

Byrne would probably like less debate, however, on the issue of banker bonuses, which AIB sought to shepherd through its agm in April only to have Donohoe vote against it.

Still, Donohoe this week took the first step towards the reintroduction of executive incentives for the first time in a decade, securing a nod from Cabinet for terms of reference for a review of bank remuneration that’s “fit for purpose” and compared against a European peer group.

Noise-sensitive overseas investors could choose to press the mute button.

The pull-back in AIB shares since December has nothing on bitcoin, the world’s biggest cryptocurrency and last Christmas’s most-coveted stocking-filler.

Starting off 2017 at around $800, bitcoin had soared to an all-time high of almost $20,000 by mid-December. It’s since slumped by more than two-thirds as investment luminaries – including Warren Buffett and JP Morgan chief Jamie Dimon – have sought to outdo each other on who could be the biggest bear on the “asset”.

Dublin City University finance lecturer Shaen Corbet, Trinity College Dublin economics professor Brian Lucey, along with two others, are the latest to enter the discussion, issuing a paper in the past week, asking whether the introduction of bitcoin futures last year will help the currency’s legitimacy.

Futures are financial contracts that oblige two parties to trade an asset at a predetermined price at a specified date in the future. Proponents of the introduction in December of the bitcoin futures market said it would make the virtual currency less volatile.

The argument was that it would attract real investors, cut out the spotty teenager-types trading bitcoin in their parents’ attic, and help the cryptocurrency establish itself as a proper store of value and medium of exchange.

However, the researchers found that bitcoin’s volatility has only increased since the launch of futures trading and, in contrast to the norm, the futures buyers and sellers are being led by the “cash” market. They amount, according to the academics, to little more than “uninformed noise traders”.

The numbers man in US-based International Paper (IP) has decided to call it a day two weeks after the group abandoned its attempt to take over Smurfit Kappa.

Publicly, at least, Landau, was gung-ho on wrapping up a Smurfit Kappa deal, almost jeering at Tony Smurfit and his team for being unwilling to dance.

However, BMO Capital Markets analysts in New York said in a note to clients this week was that their sense was that Landau may have been more cautious or sceptical about a tie-up than others in IP.

“The shake-up could reflect frustration over execution on the Smurfit approach or it may reflect difference over strategy/capital deployment,” said analysts Mark Wilde and Ketan Mamtora in a note to clients on Thursday.

Might Nicholls – CFO when IP carried its largest ever deal, for $6 billion, in 2008 – be involved in another tilt at Smurfit Kappa when IP is free again in less than 12 months under Irish takeover rules to make another approach?