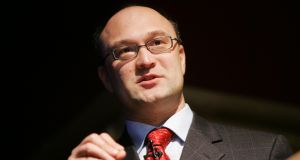 The High Court may order Pramit Ghose, former managing partner of liquidated Bloxham Stockbrokers, to furnish a full record of transactions on an account the firm managed for a brain-damaged Co Cork man.

Ms Justice Marie Baker said she may require Mr Ghose to furnish a full record of transactions in the form of an account showing how the firm managed money on behalf of Kenneth Best, a ward of court who suffered severe brain damage as a child and won then record damages of £2.75 million (€3.5 million) in the early 1990s.

In a 38-page ruling, the judge found in favour of Mr Best’s elderly mother Margaret and sister Carmel who have no money to care for him and want to find out how Bloxham dealt with funds being managed for him.

Mr Best, now 49 and from Youghal, suffered severe brain damage after being given a toxic whooping cough vaccine as a four-month-old.

His mother won a landmark case against the manufacturer of the vaccine in the Supreme Court in 1992 after a 14-year legal battle that she began when her son was nine years old.

Mrs Best and her daughter have claimed Bloxham, which managed his fund from 2002 until the liquidation of the firm in 2012, failed to give any adequate account of what happened the fund under its stewardship.

The limited data that was given to them was unintelligible, the women claim.

The Bests sought an order seeking Mr Ghose and several other named former and retired partners of Bloxham to “give an account of the dealings in the fund.” The judge noted the action was not grounded on an allegation that the defendants acted in any wrongful way with regard to the management of the fund.

Ms Justice Baker directed the liquidator of Bloxham, Kieran Wallace of accountancy firm KPMG, to allow the Bests to inspect 504 boxes of the stockbroking firm’s documents held by him that will enable their financial adviser David Croft to inspect and analyse the documents to consider the adequacy of the records.

She ruled that two retired Bloxham partners, David Harlowe and John Maguire, could be called upon if necessary to fill in gaps to explain the management of Mr Best’s fund, even though she accepted arguments made on their behalf that they were not now in a position to explain any documents furnished.

Bloxham was directed to cease trading by the Central Bank in May 2012 and Bloxham’s accounts were moved to another stockbroking firm Davy the following month.

Mr Ghose told the court he believed that reports concerning Bloxham’s management of the Mr Best’s funds were provided to the Office of the Wards of Court on a quarterly basis between 2002 and 2012.

The judge said that correspondence from that office “somewhat alarmingly” suggests regular reports were not received from Bloxham and that in July 2009 it said that it had not received any reports from the firm.

She concluded that documents connected to the account presented in court were not complete and included one long statement of account for a period of five years, from 2004 to 2009, which “is not consistent with the stated intention in 2002 that statements would be furnished on a quarterly basis”.

The judge may ultimately make an order against Mr Ghose requiring him to account to the committee. This could be obviated if the interim measures reveal sufficient information for the committee’s financial expert to be satisfied.