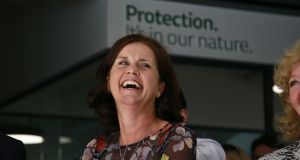 CEO of FBD Insurance Fiona Muldoon: cleared of an internal allegation made against her. Photo Nick Bradshaw for The Irish Times

FBD Holdings chief executive Fiona Muldoon has been cleared of an internal allegation made against her.

In a statement to investors after the close of the stock market on Monday, FBD said the investigation, which was carried out by law firm William Fry, had concluded.

“Further to its announcement of June 29th, the board of FBD Holdings plc today announces the conclusion of an independent investigation into internal allegations made against the chief executive,” it said. “The allegations have not been upheld. The chief executive, Fiona Muldoon, and her management team will continue to develop the business of FBD for the benefit of customers, shareholders and staff with the full confidence and support of the chairman and the board.”

It is understood that the non-executive directors of the board, led by chairman Liam Herlihy, had pressed for the investigation to be completed within a matter of weeks in order to draw a line under the matter.

The investigation was reportedly carried out on foot of a recent complaint by the company’s human resources director, Sarah Ryan, against Ms Muldoon.

However, the source of the complaint – or its details – were never confirmed by either the company or Ms Ryan. She had joined FBD last September from Permanent TSB.

When the complaint was made, FBD, as Ireland’s only publicly-quoted domestic insurance company, decided to create an “insider list” of individuals that were aware of the potentially market-moving matter.

Ms Muldoon joined FBD from the Central Bank of Ireland in March 2015 where she had been head of banking supervision since 2011. While in that role, she took the banks to task for failing to tackle the problem of mortgage arrears.

Before her stint as a regulator, she spent 18 years with global insurance group XL, including seven years in Bermuda.

She was named interim chief executive in July in 2015, succeeding Andrew Langford, before securing the top job on a permanent basis three months later.

Ms Muldoon streamlined the business and replaced virtually its entire executive team. She also renewed FBD’s focus on the prices it charged and the risks it took on.

That followed a period of heavy restructuring at the company, including the sale of property investments, scaling back the use of insurance brokers, hiking premiums, and closing the company’s defined pension plan to future accrual.