Barclays set to become Ireland’s biggest bank thanks to Brexit 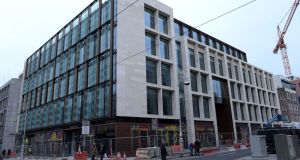 UK financial institution Barclays is set to become Ireland’s biggest bank by assets as it readies a Brexit contingency plan that will see it ultimately shift ownership of all of its European branches to Dublin.

Such a move would see it bring assets of some €250 billion to Dublin, making it far bigger than Bank of Ireland at €123 billion or AIB with €90.1 billion.

The bank, which has previously outlined plans to expand in Ireland, adding up to 200 new employees, recently moved into its new headquarters at One Molesworth Street.

According to Reuters, citing sources, Barclays has begun shifting direct ownership of its French, German and Spanish branches from a British-based entity to its Irish bank, ahead of Britain’s exit from the European Union.

The British bank outlined plans to expand its EU-based Irish entity in a slide presentation to investors earlier this month, saying the unit would primarily consist of Barclays’ corporate, investment and private banking activities and its Barclaycard credit card business in Germany.

In addition to the French, German, and Spanish branches, Barclays will ultimately move all of its European branches under control of Barclays Bank Ireland, one of the sources said. Its other main corporate and investment banking businesses in Europe include Luxembourg, Switzerland, Portugal, Italy and the Netherlands, according to company filings.

Barclays Bank Ireland will have total assets of around £224 billion (€250 billion) after absorbing all the European business, Barclays said in its presentation to investors, out of £1.1 trillion for the entire bank as of the end of 2017.

Barclays no longer operates a consumer banking business in Europe, having sold the last of its retail operation in 2016 as the bank shifted its global strategy to focus on the United States and Britain.

While Barclays’ European branches will still ultimately be owned by its London-listed holding company, the change in organisational structure shows how lenders are shifting business to try to avoid any disruption that Brexit might cause.

Banks are trying to ensure that even under a “no-deal” scenario, where Britain would crash out of the EU without any agreements in place, they would still be able to serve EU customers as before. British banks have largely chosen to base their main European hubs wherever they already have a suitably licensed existing subsidiary, as they seek to minimise costs and inconvenience in the event a last-minute deal renders the reorganisations unnecessary.

Barclays rival HSBC has begun shifting direct ownership of its European branches from its British entity to its French subsidiary, while Lloyds is understood to be planning three EU subsidiaries.