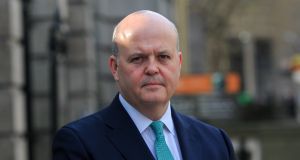 Colin Hunt is due to present his vision for AIB in early March, a timing that has not been helped by the calling of an election for February 8th. Photograph: Collins

A year into the job, AIB chief executive Colin Hunt will unveil his grand vision for the bank in early March. It’s shaping up to be an unenviable task.

The bank, which returned to paying dividends in 2017 for the first time since the onset of the financial crisis, faces having to cut its payout by almost 25 per cent to 13 cent per share for 2019, analysts at Barclays predicted this week, sending AIB’ stock lower.

The current payout level is unsustainable, they said, estimating that AIB’s full-year net profit slumped almost 44 per cent to €615 million. It’s not alone, of course. The wider sector is grappling with an income squeeze amid negative central bank deposit rates and muted loan growth, with a backdrop of uncertainty over Brexit and the Irish housing market.

More worryingly, Barclays analysts say AIB’s level of surplus capital that could make its way back to shareholders – and a key driver of the bank’s value when the Government sold a 29 per cent stake on the stock market in mid-2017 – is a good bit lower than many in the market expect.

At the time of the initial public offering (IPO), the consensus view was that AIB had more than €3 billion of excess capital following on from its €20.8 billion State bailout. Barclays sees it at closer to €1 billion these days. Taxpayers still own 71 per cent of the bank. They have so far recovered a little over half of its bailout bill.

Hunt has flagged that 1,000 jobs – or almost a tenth of its workforce – will be shed between 2018 and 2020, including hundreds of redundancies in 2019 to try and shore up profits. However, material cost savings are unlikely to be realised before 2022, Barclays said.

Adding to Hunt’s headaches, the Taoiseach Leo Varadkar has called a general election on February 8th. AIB stands out as one of the most exposed stocks on the Irish market to the outcome.

AIB featured prominently in the last programme for government, even if it wasn’t named, when the document committed to selling only a 25 per cent stake (plus any small additional shareholding required by investment banks running a sale to complete the process) in any bank before the end of 2018.

Calls in late 2017 and 2018 from then AIB chief executive Bernard Byrne, and head of the National Treasury Management Agency Conor O’Kelly, for the State to sell additional shares swiftly while the stock was high were regrettably ignored.

AIB shares are changing hands about 33 per cent below their IPO price and at a 40 per cent discount to the value that the bank puts on its assets, meaning a further share sale is highly unlikely any time soon.

Irish bank shares have been further hit in recent years by a particularly noisy 32nd Dáil, according to market sources. Factors included the introduction of a Fianna Fáil Bill to give the Central Bank powers to limit variable mortgage rates, which passed the early stages of the Oireachtas in 2016, and draft Sinn Féin laws to prevent banks selling problem loans without borrowers’ consent.

Both have now lapsed with the dissolution of the Dáil this week. But might similar Bills make an appearance in the next Dáil and secure passage?

Bank shares also wobbled at times in recent years as investors took fright at calls from Opposition parties and the influential Oireachtas Public Accounts Committee to limit the sector’s ability to use losses built up during the financial crisis to lower their tax bills over the long term.

AIB has by far the highest level of so-called deferred tax assets (DTAs), at €2.6 billion as of last June. That compared to €1.1 billion at Bank of Ireland and Permanent TSB’s €350 million.

Minister for Finance Paschal Donohoe consistently ruled out amending the tax regulations, given how DTAs accounted for a significant proportion of banks’ capital reserves as they recovered from the financial crisis (limiting their bailout costs), and the fact that any changes would lower the value of the State’s holdings.

Still, banks have good reason to remain wary. AIB highlighted in an updated bond prospectus last month how the UK introduced legislation in 2015 restricting the proportion of profits that could be offset by carried-forward losses to 50 per cent. The following year, it lowered it again, to 25 per cent.

There is also the threat that AIB’s bank’s level of DTAs would not be supported if its long-term profit projections deteriorated.

The exchequer has partially offset a lack of corporation tax receipts from rescued banks in recent years through a €150 million industry levy, set to run out to 2021. The next government, again, will decide future policy on this.

AIB has also been by far the most vocal bank on the effects of pay caps and a bonus ban across bailed-out Irish lenders in recent years. Chairman Richard Pym, who’s due to step down in March, said in 2018 that the restrictions had turned the bank into a “training ground” for bankers that could be snapped up by overseas-owned companies.

Mr Donohoe kicked the thorny issue to touch almost two years ago when he decided to bring in outside experts to review bankers’ remuneration. The final report, submitted last June, is said to have called for a relaxation of the caps. It was still gathering dust on Donohoe’s desk as Varadkar called the election on Tuesday.

Hunt has sought since he took over the helm at AIB to shift the focus from executives to ordinary bank staff.

“The pay cap impacts a tiny number of people,” he told reporters in July as he reported his maiden set or results as chief executive. “The big issue is the fact that we have an effective ban on variable pay. That affects far, far more people and our competitors don’t have that.”

What new government would put a restoration of bonuses at the top of its agenda?