Dublin lagging behind in race to secure Brexit investments

With QBE and Lloyds choosing Brussels, time is running out to lure big financial firms here 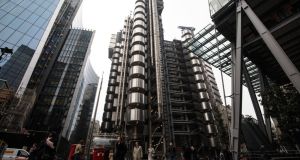 Lloyds of London won’t be moving to Dublin, having chosen Brussels as its post-EU base.

On Wednesday morning the Lions ran out to play at the QBE stadium in Auckland. Australian insurer QBE, one of the world’s top 20 general insurers, has had the naming rights on the stadium since 2014.

Twenty-four hours earlier, it emerged that QBE, which has a big operation in London, was to set up its post-EU hub in Brussels, billed by the Financial Times as a “blow to Dublin”, which had hoped to be the home for the bulk of the London-based insurers setting up operations within the EU post-Brexit.

Insurers and other financial service companies will not be able to sell services around the EU out of their London operations post-Brexit, as London withdraws from the single market. No one is quite sure what rules will be put in place, but the financial sector cannot sit around and wait to see.

Are we at risk of missing out on a flood of inward investment from insurance companies and other financial firms preparing for Brexit? Some projects are certainly choosing Dublin.

Beaten to the punch

But in recent months Ireland has lost out on a few big players, notably in the insurance sector. Financial industry sources say that Ireland has been beaten to the punch, with others offering better deals – particularly in terms of regulation – to key targets. IDA Ireland recently said that it remains confident of a few big projects landing here.

The two big insurance moves in recent months were AIG, which has chosen Luxembourg for its post-Brexit EU base despite having significant operations in Ireland, and Lloyds of London, the insurance syndicate, which recently chose Brussels over Dublin.

We had been seen as the likely first choice for the insurance sector in particular, as English-speaking and with a common law system. But it doesn’t seem to be working out like that.

The worry for Ireland now is that others tend to follow big players like AIG and Lloyds. And if Dublin loses out as a financial centre to the likes of Luxembourg and Brussels for new investments, some subsidiaries already here could also lose out in future investment decisions as operations are consolidated into these locations.

Ireland has had its insurance “wins” too. Legal & General is expanding its investment management operations here, Standard Life has said Ireland will be its base within the EU, and Aviva and Royal London are turning their Irish operations into fully-fledged subsidiaries.

The Central Bank said recently that it had 10 insurers who had either applied to operate here or had indicated a firm intention to do so, while another 20 had made enquiries. But in insurance as well as in wider financial services, Ireland’s Brexit campaign is in need of a few big successes.

In a boost to the financial sector, JP Morgan announced recently that it had bought a big building in Dublin’s docklands and would expand here, though it said much of this was to do with business demand rather than being Brexit-specific.

Credit Suisse might also seek a full banking licence here, and Bank of America Merrill Lynch has said that Dublin is its “ default” location in the EU after Brexit.

However, there is a lack of big players establishing new so-called risk-taking operations here – in other words the big, highly paid operations at the heart of finance. The next few months will be crucial. Regulatory approval for a big firm usually takes at least a year – and Brexit is now 22 months away. The clock is ticking and the coming months are crucial.

Talking to sources in the wider financial sector, two concerns emerge. One is a feeling that Ireland hasn’t quite got its act together in terms of pitching to the financial sector in the same way as other centres.

The second, and related, comment refers to the approach of the regulator, the Central Bank of Ireland, with a feeling that its counterparts in Luxembourg and Belgium have been faster and more flexible, while staying within the regulatory rules. Housing shortages and high rents are seen as an issue, but regulation is seen as central.

Minister of State Eoghan Murphy said earlier this year that some other countries were engaged in “regulatory arbitrage”, suggesting they were offering less-onerous regulation in return for investment. Also, conscious of the financial crash, the regulator here will not want to give any hostages.

Looking in from the outside, this is hard to judge. The last thing we want is a return to “light touch” regulation. But nor do we want to lose out in the Brexit investment battle. Industry sources believe we can do more, and that not doing so risks missing a once-off opportunity. As the remaining big financial operators make their calls in the months ahead, there is a lot at stake.