Opinion: ‘The long, tricky job of dealing with the bad loans – in mortgage borrowings and SMEs – remains unfinished’ 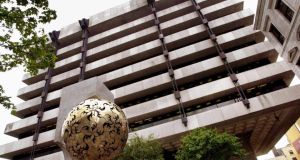 ‘There was a stand-off for a couple of years as the Central Bank called for banks to start “dealing with” these loans, but not a lot happened, partly because everyone was afraid of further holes appearing. “We want them to get on with it, but not too quickly,” was how one senior government official explained it to me at the time.’ Photograph: Matt Kavanagh

Tomorrow the results of the “stress tests”, which measure the health of bank balance sheets, will be published across Europe. The spin will be that for most of our banking sector it is now back to “business as usual”. If only this were the case.

The problem, however, is not the one we have spent the last few years arguing about. Most of the banks have balance sheets which are now strong enough, in terms of withstanding any future shocks. The days of pouring in extra billions are over, even if the situation at Permanent TSB still has to be sorted.

Unfortunately this, in itself, is far from enough to restore a normal banking market. We have still to work through the legacy of bad debts weighing down the bank loan books and – crucially – ensure we have enough competition in the banking market.

AIB and Bank of Ireland will pass the stress tests. Permanent TSB will need new capital, but only in the scenario that models what happens if a new crisis hit. The bank will continue in business, but the rules will oblige it to raise new cash in the months ahead. Provided economic growth remains solid, you would hope it could raise money from private investors, rather than having to fall back on the State.

However the Government will have to give up some of its shareholding. A special financial bond which the Government previously used to invest cash in Permanent TSB may also come into play.

So there is still some cost to the State here – and some financial exposure. But overall the rest of the banking sector has enough capital and is now inching back into profit.

There has been much focus – quite correctly – on the legacy in terms of our national debt of the more than €64 billion we have already put into the banks. We have got some back, of course. And if the economy and the markets stay favourable and the State can start to sell down its stake in AIB, then perhaps we might eventually recoup €20 billion of the €64 billion, or even a small bit more.

Talk of somehow off-loading part of this bill on Europe appears to now be effectively dead, though the Government continues to pursue other avenues to try to get assistance from Europe as a trade-off.

However, we still face the corrosive legacy of the bust in the bad loans blocking bank balance sheets and the huge decline in competition for the public caused by the departure of a number of banks and the restructuring of others.

“Honey, I shrunk the banks” became a bit of a catchphrase internationally as regulators put pressure on them to shrink their lending and get themselves back on an even keel.

The stress tests are to measure whether stability has been regained. The banks have been “minding themselves” in the run-up to the tests, being careful, in particular, to have enough cash available in their bottom drawer to be ready to meet any conceivable downturn. The banks may be advertising that they are “open for business” – and new lending is happening. But loan repayments are happening at an even faster pace.

Consider this. The volume of loans outstanding to households was down 3.7 per cent year on year in August and loans to businesses were down 8.4 per cent. A lot of this is due to lower demand for loans, of course, but banks have not been out looking to grow their loan books too quickly, either.

Removing this threat of the stress tests will end one of the issues that have been slowing the flow of new loans – but only one. The long and tricky job of dealing with the bad loans – in mortgage borrowings and SMEs – still has to be finished, too, to free up resources for new lending.

There was a standoff for a couple of years as the Central Bank called for banks to start “dealing with” these loans, but not a lot happened, partly because everyone was afraid of further holes appearing. “We want them to get on with it, but not too quickly,” was how one senior government official explained it to me at the time.

So bad loans were left to fester on and a serious push to deal with them only started late last year.

Now, in a growing economy and with enough capital, there is no excuse for the banks not getting on with it.

Then there is the competition question. There is a real threat here. If, for example, AIB and Bank of Ireland were to dominate the market without much competition, then credit would grow slowly as they fix their loan books and they would take the opportunity to rebuild their profits by charging higher interest rates. Just look at the treatment given to standard variable rate mortgage holders.

We need Ulster Bank to remain committed to the market on the whole island and, hopefully, a restructured Permanent TSB to remain a force. We need new players in the market, too. And we also need new sources of lending from outside the financial system, particularly for business. Otherwise, sooner or later, the economic recovery will run into a financial roadblock.

There may not be too much stress for Ireland in tomorrow’s tests. But normal transmission in the banking sector is not yet resumed. And let’s not pretend that it is.