Cliff Taylor: Selling on of loans means future is uncertain

Like the mortgage debt crisis, the crisis of small business debts still has a way to run 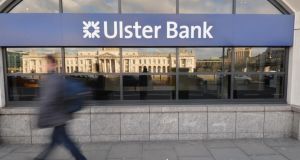 Recently a group of SMEs and farmers with loans from Ulster Bank were given until the end of this month to refinance their loans. Photograph: Alan Betson

What do you do if your bank tells you that your loans may be sold on, if you cannot put a plan forward to refinance them by a certain date?

Many borrowers have been faced with this dilemma, most recently a group of SMEs and farmers with loans from Ulster Bank, who have been given until the end of this month to refinance their loans.

If not, they have been told, they could be sold on, most likely to one of the large funds that have been buying up Irish debt.

These so-called “ vulture funds” are probably feeling a bit sore at the moment. Ireland was glad to see their money flood in at the height of the crisis, now they are in the PR firing line. However those who got in early have, in most cases, got very handsome returns.

In contrast, it is clear that while the wider economy is in recovery, there is a significant group of business and personal borrowers mired in heavy debt, usually, though not always, related to property.

The reviving economy, and rising property prices, have improved the position of some of these borrowers, but many remain deep underwater.

The possible sale of an unquantified number of loans by Ulster Bank – many apparently related to SMEs and farmers – is just another sign of something that has been clear for some time.

The legacy of the era of bad debts is going to take years to clean up. Promises early on in the crisis that banks and borrowers would be pushed to “sort things out” quickly have not, in many cases, worked out.

There has been a lot of focus – legitmately – on the plight of borrowers with mortgages, but many business owners also remain in deep trouble.

Over the past year or so there have been signs of a new determination by banks to start sorting through their loan books. But this has also been reflected in a rise in court enforcement actions, taken both by traditional banks and by the “vultures” .

Like a traditional banker, the fund is likely to judge, in many cases, that pushing a borrower towards bankruptcy is not likely to maximise the return on the loans. So instead they may press the borrower to sell some assets to return cash. In all this they are likely to operate in a shorter time horizon than the traditional banks.

In fact, advisers now warn that businesses may find themselves in a kind of bad debt “pass-the-parcel” with their loans sold on a number of times. Most of the loans being sold are in arrears.

Some two-thirds of the Ulster Bank borrowers who have been written to were described as “severely impaired”, while the rest were also in arrears, albeit not so heavily. The difficulty for these borrowers is that it is likely to be impossible to raise new finance to buy out their loans on workable terms.

While Ulster Bank has not commented on who it might sell to, the likely buyer of such loan books would be one of the funds that specialise in impaired loans. They will buy the loan book at a significant discount, and hope to get out ahead in a few years by squeezing borrowers for repayment where possible, usually through asset sales either agreed or after enforcement action.

However, many of the larger funds are then likely to sell on the remaining loans yet again, to try to get the last bit of value out of them.

So, for example, a general fund might sell on loans attached to certain types of retailers, or manufacturing businesses, or whatever, to funds with a specialist knowledge of these sectors. In turn these new owners would hope to able to squeeze a bit more from the borrower by utilising their expert knowledge.

It is not a pretty outlook for the distressed business borrower. Unless their fortunes turn and they can buy themselves out, they could end up dealing with a succession of institutions over the next few years, all with a different attitude to getting a return.

Like the mortgage debt crisis, the crisis of small business debts still has a way to run.They can only look on and wonder as they see big developers “emerging” from Nama and wondering when they will ever emerge from their debt burden.