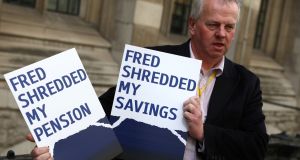 A man protesting outside court as RBS pursued last-minute settlement talks with a group of investors to avoid a trial. Photograph: Neil Hall/Reuters

A group representing thousands of shareholders has reached a £200 million settlement with Royal Bank of Scotland over its 2008 rescue funding, sparing former chief executive Fred Goodwin an appearance in court.

A person close to the RBS Shareholder Action Group, which represents about 9,000 retail investors, said it had accepted the bank’s offer of 82p per share on behalf of its members.

The group has “accepted legal advice, and the matter will not now go to court”, he said. “If we had proceeded to trial there would have been a risk that we could win and not achieve the 82p per share for our members.”

The case centred on shareholders’ claims that RBS misrepresented the state of the bank’s health at the time of its rights issue in 2008. When RBS subsequently required the UK’s largest bank bailout at £45.5 billion, shareholders who had invested in the rights issue lost most of their investment.

RBS doubled its offer to the shareholders to 82p a fortnight ago, one day before a trial on the matter was due to open. Since then the two sides have been in intense talks, causing the trial to be adjourned three times.

Investors claimed the prospectus for the rights issue contained misleading information about RBS’s financial position under Mr Goodwin’s leadership and sought compensation. RBS and the directors denied any wrongdoing.

Mr Goodwin, who served as chief executive of RBS at the time, was due to appear in court, along with other former senior RBS bankers.

A small subset of shareholders within the action group, resolute on holding Mr Goodwin to account, pushed to raise extra funding last night to proceed with the court case. They claimed to have gathered £7 million.

The bank and investors were locked in a stalemate at the end of last week after a meeting was held with Ross McEwan, RBS chief executive, and no conclusion was reached, according to people briefed on the issue. RBS refused to raise its offer from 82p, one banker said.

RBS has over the past few months settled with groups representing various other shareholders. It set aside £800 million at the end of last year for such payments and not all of it has been used.

The settlement deal reached on Monday is expected to cost £100 million on top of the £800 million, one banker involved in the process said.

Mr Goodwin, who was stripped of his knighthood in 2012, has rarely been seen in public since RBS’s near collapse. He agreed to reduce a £700,000 annual pension only following a very public battle. He still lives in Edinburgh.

RBS and the shareholder action group declined to comment.

1 Lahinch Golf Club runs out of its own cash after €3m Covid-19 hit
2 Fiona Reddan: Who’s afraid of Revolut? Not AIB and BOI it seems
3 Irish start-up which developed facial recognition for cows raising over $50m
4 Son putting elderly dad under pressure to sign over land
5 Clanwilliam Group sees revenue rise to €84m
6 John FitzGerald: What is actually behind Ireland's economic growth?
7 WH Smith Ireland reports weaker profits as turnover rises
8 How much can Ireland borrow to get through this Covid-19 emergency?
9 Ryanair warns of further cuts, Stripe to raise more funds, and AI for cows’ faces
10 Chris Johns: A political dogfight grips London, but what, exactly, are they fighting about?
Real news has value SUBSCRIBE