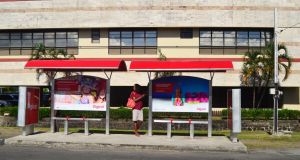 Digicel is in the middle of a plan to wipe away as much as one-quarter of its $7 billion debt. Photograph: iStock

Denis O’Brien’s Digicel mobile group, which is in the middle of a debt restructuring, has denied reports that it is in talks to sell its Pacific unit to China Mobile.

“We can categorically state that there is no basis to this whatsoever and that no approach has been made to us,” a spokesman for Digicel said, responding to a report in the Australian Financial Review that the state-owned Chinese company has been carrying out due diligence for some months on the Digicel unit, which could be worth as much as $900 million (€834 million).

Digicel is in the middle of a plan to wipe away as much as one-quarter of its $7 billion debt, after moving in early April to ask five classes of bonds to wipe away a total of $1.7 billion of what they were owed by swapping their securities for notes of less value.

The restructuring deal has been largely supported by the bondholders as they fear they face even larger losses if they do not sign up to a consensual deal. However, the arrangement has been described by Moody’s “as a distressed exchange, which is a default” according to the debt ratings firm’s definition.

Moody’s rates the Digicel’s creditworthiness as Caa2, which is eight levels deep into “junk” bond territory and reflects the group’s “untenable capital structure and tight liquidity position” ahead of the debt restructuring being completed.

Fitch, another leading ratings firm, said this week that it would review its credit assessment of Digicel once the deal was completed. However, it also highlighted that it had “concerns about board independence from the controlling shareholder, the willingness and ability of the company to potentially move assets, and the timing and quality of the group’s financial disclosure.”

Fitch did not respond to questions from The Irish Times about its specific concerns, though it highlighted in its note on Digicel that it had a “neutral” or “minimal credit impact” on the group’s indebted entities.

A spokesman for the phone group declined to comment.

Digicel has spent $6 billion developing its networks and the business has 14 million subscribers across 32 markets in the Caribbean, Central America and Asia Pacific regions. Mr O’Brien took at least $1.9 billion of disclosed dividends out of the group between 2007 and 2015.

The current debt restructuring effort comes a little over a year after bondholders who were owed almost $3 billion agreed to postpone getting their money back by accepting longer-dated notes in exchange for their holdings.

1 Nine more suing INM and Leslie Buckley over alleged data hacking
2 Columbia Sportswear defies gloom with first Irish standalone shop
3 Could your old car be giving away all your secrets to its new owner?
4 Why are markets booming when a crash is on the way?
5 ‘The rental situation stops me moving back home’
6 Home or car: what’s the best use of my savings?
7 Restaurants file court actions against insurers over lockdown losses
8 Stocktake: Playing poker with the day traders
9 How much do Irish people earn? And what will Covid-19 do to our wages?
10 Dublin consultancy Pathfinder set for expansion after buyout by Sia Partners
Real news has value SUBSCRIBE