Problems being caused by delay in transposing of new EU directive 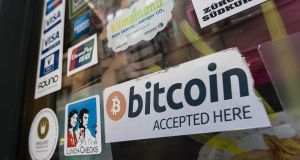 Irish companies providing cryptocurrency services say they are being refused banking services because a new EU directive has not been transposed into law.

Nearly two years after crypto companies first complained about having to open foreign bank accounts because they were unable to do so locally, Boinnex, a Co Cork-headquartered provider of bitcoin ATM machines, recently had its account with AIB closed down.

Boinnex was informed in a letter last October that the bank was to end its relationship with the company as the market for cryptocurrencies remains unregulated and is not regarded as a currency under Irish law.

“Entering into a formal relationship with entities carrying out this type of business activity is outside of our risk appetite at this time,” Boinnex founder Bryan Tierney was told.

AIB cited delays in transposing the fifth anti-money-laundering directive into law in the Republic, which was meant to have happened by the end of January. The delay is due to the general election and subsequent failure by political parties to agree a new government.

“We’ve been forced to get a banking partner abroad. A lot of companies in the space are in a similar situation. Some of these foreign banks charge exorbitant fees as they know they’re the only show in town,” said Mr Tierney.

“For our part we have been in touch with the Central Bank since 2018 and paid considerable legal costs to get our anti-money laundering (AML) and Know Your Customer (KYC) requirements in place. The Central Bank advised that we are currently outside of their supervisory framework but applauded the fact that we are self-regulating and being proactive,” he said.

Mr Tierney said the refusal of banking providers to serve crypto companies was at odds with the State’s promotion of blockchain. IDA Ireland last year sponsored a “blockchain week” at which Minister for Finance Pascal Donohoe said the Government fully supported the development and adoption of such technologies.

The Central Bank told The Irish Times that a decision to take on a customer or to offer services is a decision for individual financial services providers to make. Both AIB and Bank of Ireland have both denied suggestions that they discriminate against crypto companies.

The Irish Times previously reported nearly two years ago claims that Irish crypto companies were being denied services by local banks. One such company, Bitcove, was particularly aggrieved as it had previously won a Bank of Ireland-sponsored award for its business.

Bitcove co-founder Peter Nagle said the company still does not have an Irish banking partner.