Deutsche Bank under pressure over derivatives sales in Spain 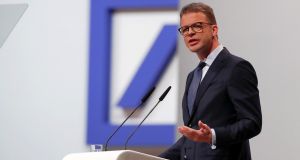 Deutsche Bank is under pressure over its sale of complex currency products in Spain as regulators await the results of an internal inquiry into contracts that pushed some small companies into financial distress and led to a series of out-of-court settlements.

The German lender started an investigation following client complaints after becoming concerned it may have sidestepped the EU’s Mifid II rules designed to protect small businesses from risky lending. It said a “limited number of clients” might have been affected.

“Internally, this issue is seen as toxic,” said a person briefed on the investigation.

The European Central Bank, Germany’s BaFin and the Spanish financial regulator CNMV are following the matter closely, and will determine whether to take action after the internal review, people familiar with the situation said.

The affair adds to pressure on Deutsche chief executive Christian Sewing, who has pledged to improve the lender’s internal controls after repeated breaches and billions of euro in penalties over the past decade.

Certain senior Deutsche investment bankers in London and Spain appear to have targeted small, financially unsophisticated import/export companies with €10 million to €100 million of annual sales for more than a decade until 2019.

A 2009 IMF paper examined the role of these sort of instruments, sold by a variety of banks around the world, in stoking the financial crisis.

“[The SMEs] have confidence in their banks and are not aware that these products will put them in a risky position,” said Prosper Lamothe Fernández, a finance professor at the Autonomous University of Madrid. He has assessed the contracts of affected companies and provided expert testimony in court.

Prof Fernández estimates that between 300 and 500 Spanish companies could have suffered losses on the products as far back as 2006, including transactions with lenders other than Deutsche. The average hits were between €5 million and €10 million, people familiar with several of the disputes said.

The losses pushed some clients into acute financial problems, and a few companies took Deutsche to court in Spain. Some of the cases were dismissed, but the German bank settled with several others, people involved in the arbitration said.

The products in question are foreign exchange swaps, derivatives called “targeted accrual redemption notes and forwards” (Tarn and Tarf). They were pitched by Deutsche’s salespeople as a cheaper way to hedge exposure to currency pairs, such as the dollar-euro, than traditional exchange rate insurance.

Small companies were told the products were “zero premium” with no initial cost and could even make the clients money, according to people familiar with the matter.

In a stable currency market the derivatives sometimes benefited clients. However, if volatility increased and the exchange rate swung beyond a predetermined barrier, the cost could rapidly multiply.

The practice at Deutsche continued even after Mifid II, which came into force in 2018, prohibited the sale of sophisticated derivatives to small companies. The rules permit clients to ask to be treated as more sophisticated in order to access a wider range of products, and Deutsche encouraged clients to do so. – Copyright The Financial Times Limited 2021

5 How to avoid a communication breakdown

9 Why Irish households are not, after all, among the best off in the EU