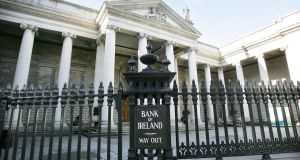 Bank of Ireland reported that it swung into underlying pre-tax loss of €374 million last year.

Bank of Ireland shares rose on Monday as executives signalled they may launch a share buyback programme next year for the first time in almost two decades, after the lender posted better-than-expected 2020 results with loan losses stemming from the Covid-19 economic shock appearing to be less than feared.

The bank reported an underlying pre-tax loss of €374 million last year, which was much better than the consensus view among analysts of a shortfall of almost €600 million. This was helped by the fact that its loan loss provisions came to €1.1 billion – at the bottom of the €1.1 billion to €1.3 billion range that the bank had previously forecast.

In addition, the bank surprised the stock market by returning to profit in the second half of last year. Group chief financial officer Myles O’Grady told analysts on a call that 60 per cent of the loan charge taken last year covered borrowings that had not yet run into trouble, as Government supports and bank payment breaks underpinned the economy last year.

Mr O’Grady predicted that provisions for 2021 would be “materially below” last year’s figure, based on the hope that the economy will gradually open in the coming months as Covid-19 vaccinations continue and infection rates decline.

He said the bank, which is also cutting costs at pace, including a plan to close 103 branches on the island of Ireland later this year, is focused on returning to profit in 2021 and shareholder “distributions” from 2022.

These are likely to include a resumption of regulator dividends and share buybacks, he said. Shares in Bank of Ireland rose 4 per cent to €3.52 in Dublin.

The last time Bank of Ireland was in the market buying back its own shares was in early 2004. Lenders across the euro zone were forced to abandon dividend plans early last year as regulators pressed for banks to restrain from making payouts.

Meanwhile, Mr O’Grady said the bank aims to sell a portfolio of legacy non-performing mortgages this year as it deals with a wave of fresh defaults this year stemming from Covid-19.

The bank had postponed a planned sale of a batch of problem mortgages last year – which was to be carried out by a way of a bond market refinancing, or securitisation - as it focused on the evolving coronavirus crisis.

Of 39,000 payment breaks extended to households and businesses last year as the result of an industry-wide initiative, 93 per cent have returned to pre-Covid terms, while 6 per cent have required additional support. Payment holidays remain active for 1 per cent.

The level of SMEs requiring further forbearance, at 11 per cent, is almost triple that of mortgage borrowers.

In the UK, Bank of Ireland granted 60,000 payment breaks, with 8 per cent still active and 2 per cent requiring further support after the end of the relief period.

The extent to which borrowers have returned to regular payments has surprised bankers across the industry, compared to what had been feared almost a year ago when the virus ripped through the Republic and triggered an initial lockdown.

House prices and headline economic data have also proven to be better than expected.

Goodbody analyst Eamonn Hughes said Bank of Ireland’s 2020 figures were better than he had estimated and said that he was likely to upgrade his projections for this year.

“It’s early in the year and [Ireland and the UK are] in extended lockdowns, but momentum is good,” Mr Hughes said, adding that Bank of Ireland would benefit from business moving to it from Ulster Bank, which was put into gradual wind-down last month by its UK parent, NatWest Group.

Bank of Ireland chief executive Francesca McDonagh declined to comment to reporters on whether the company was circling parts of Ulster Bank. The bank has cut its overall running costs from €1.9 billion in 2007 to €1.7 billion last year. It now plans to cut expenses to €1.5 billion by 2023.

Much of this will be driven by the bank’s announcement in November that it is eliminating 1,450 full-time-equivalent roles, with a total of 1,700 full- and part-time staff taking up a voluntary redundancy offer.

Ms McDonagh said that voluntary redundancy would be offered to those among the 200 staff working in branches that are set for closure who do not transfer to other locations or business units.