Executive has held multiple roles in bank’s operations in Dublin, Frankfurt and London 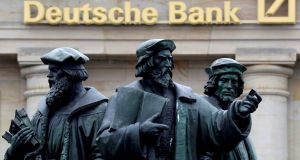 The appointment of Mary Campbell as the head of Deutsche Bank’s operation in Ireland comes at a time of massive restructuring at the German bank. Photograph: Kai Pfaffenbach/Reuters

Deutsche Bank has appointed a long-time senior Irish executive with the group, Mary Campbell, as the head of its operation in Ireland after previous incumbent Fiona Gallagher quit to head US banking giant Wells Fargo’s European arm from Dublin.

Ms Gallagher, who had been with the German bank for 15 years, took up her new role earlier this month. Ms Campbell had been announced internally in recent months as her successor.

Ms Campbell joined Deutsche Bank as part of its $10.1 billion (€9.1 billion) purchase in 1998 of New York-based Bankers Trust, where she had been working for the previous two years.

The executive has held multiple global roles from Deutsche Bank’s operations in Dublin, Frankfurt and London over the past two decades, including leading cash management operations in Germany and the UK, as well as running global transaction banking for the group.

More recently, Ms Campbell has taken responsibility for Deutsche Bank’s corporate and investment banking operations in its 19 locations across European, the Middle East and Africa – a position that will continue along with her role as chief country officer for Ireland, where the group employs about 750 people.

The appointment comes at a time of massive restructuring at Deutsche Bank after the group drew a line in July under a 20-year attempt, that began with the Bankers Trust deal, to break into the top ranks of Wall Street.

Chief executive Christian Sewing announced in July that the Frankfurt-headquartered lender was shutting its loss-making equities trading business and shrinking its bonds and rates trading operations significantly. The plan involves cutting 18,000 jobs – or 20 per cent of the bank’s global workforce.

Sources said at the time that the job losses in Ireland would be “minimal”. It was reported earlier this month that half the planned job cuts will be in Germany, with New York and London also bearing the brunt.

Deutsche Bank, founded in 1870, has been in Ireland since 1991, mainly in the area of global transactions banking (GTB), which covers cash management, trade finance, treasury, trust and securities services for global customers. Sources have highlighted that this is a targeted area of continued growth for the group.

The number of employees in Dublin has more than doubled in the past five years as it expanded its GTB and global technology and operations hubs in Ireland.

1 Should my mam wait for house prices to drop before buying?
2 Citigroup warns that markets are out of step with reality
3 US ‘hard seltzer’ drink White Claw launches in Ireland
4 Chris Johns: Past is another country when it comes to our post-pandemic future
5 If you injure yourself working from home, is your employer responsible?
6 Michael Smurfit: ‘I asked Trump to invite me to the White House for my 80th birthday’
7 Donohoe told insurers they risked ‘irreparable damage’ to reputation
8 ‘I’m so lucky to be in the Caribbean – a million miles from Derry Girls’
9 Household savings soar as consumers stop spending
10 Joint accounts: if one of us dies, can the other access the money?
Real news has value SUBSCRIBE