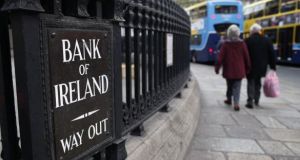 The main priorities of Bank of Ireland’s new CFO, Myles O’Grady, will include delivering on a three-year financial plan. Photograph: Peter Muhly/AFP/Getty Images

Bank of Ireland has selected a former top finance executive at AIB, Myles O’Grady, as its next chief financial officer (CFO), succeeding Andrew Keating, who is leaving the State’s biggest retail lender by the end of the week.

Mr O’Grady, who was heavily involved in AIB’s initial public offering (IPO) in 2017 as its group director of finance and investor relations, quit the second-largest bank by assets the middle of 2018 and subsequently took on the role of CFO at a housebuilder called DRes that was being lined up for flotation.

US private-equity giant Lone Star and Patrick Durkan, managing director of Durkan Residential, were seeking to line up a €300 million-plus IPO of DRes. However, the transaction was put on ice late last year as global equity markets stumbled and sentiment towards quoted Irish housebuilders waned.

Mr O’Grady, who also previously worked with international financial services organisations including Citibank and Dresdner Kleinwort Benson, was hired by Bank of Ireland in June as director of commercial partnering in Ireland.

Goodbody stockbrokers analyst Eamonn Hughes said the fact that Mr O’Grady accompanied Bank of Ireland chief executive Francesca McDonagh to a major European banking conference in London in the middle of last month was seen as “a heavy hint” that he was the frontrunner for the job.

Other internal candidates were said to include Seán Crowe, chief executive of the bank’s markets and treasury division, and Michael Murphy, managing director of the group’s life insurance arm, New Ireland.

“Myles O’Grady brings significant experience to the position of group chief financial officer and his appointment will be welcomed,” said Davy analyst Diarmaid Sheridan, adding that the new CFO’s main priorities will include delivering on a three-year financial plan.

Ms McDonagh’s plan, outlined in June 2018, includes increasing the group’s loan book by 20 per cent, investing up to €1.4 billion on an information technology overhaul and restructuring, reducing costs by 10 per cent to boost returns by the end of 2021.

The key target goal is to boost returns on shareholders’ equity in the bank, a key measure of profitability, to more than 10 per cent from a figure of less than 7 per cent when Ms McDonagh took over two years ago.

Ms McDonagh said in July, as the bank reported a decline in first-half profit, that she may have to step up cost-cutting as uncertainty over Brexit and lower-for-longer European Central Bank interest rates threatened the group’s ability to deliver on its targets.

Mr Keating, Bank of Ireland’s CFO since 2012, surprised the market by announcing he was quitting the lender after a decade and a half to join building materials giant CRH as head of the group’s finance function. The departure added to criticism within the banking industry of pay caps across bailed-out banks.

Mr Keating was paid a salary of €468,000 at Bank of Ireland last year, with additional benefits of €30,000 and a €53,000 pension contribution for a total remuneration package of €531,000. His counterpart at CRH, its chief financial officer Senan Murphy, to whom Mr Keating will effectively report, was paid a package in 2018 worth almost €2.8 million.

Commenting on Mr O’Grady’s appointment, Ms McDonagh said: “Myles brings a wealth of experience to this important role, as the bank continues to deliver against its strategic priorities to transform the bank, serve customers brilliantly, and grow sustainable profits.”