Davy earned more than €1.7m in fees from AIB’s IPO 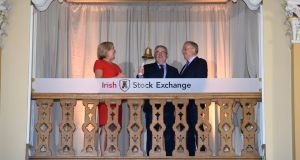 Securities firms Davy, Deutsche Bank and Bank of America Merrill Lynch are understood to have made €1.7 million each acting as the leading financial firms in AIB’s €3.4 billion initial public offering (IPO) during the summer.

However, Davy was also one of the main beneficiaries of a €1.2 million pot divided among eight stockbroking firms that sold €300 million of the AIB shares on behalf of the Government to 6,500 small investors, The Irish Times has established. Goodbody and Investec also received large portions of this sum.

Goodbody and international investment banks, including Morgan Stanley, Citigroup, Goldman Sachs, JP Morgan and UBS, are believed to have received almost €864,000 each for acting as so-called bookrunners and co-underwriters of the deal.

Investec received half of that amount for working on the institutional element of the deal.

The €12 million fees deal agreed by the Department of Finance with securities firms working on the deal – but paid by AIB – equated to 0.35 per cent of the amount raised by the State in the IPO, about one-tenth of what underwriting deals can commend for flotations.

However, the department was able to beat down the fees in this particular transaction, given how prestigious the deal was, as Europe’s then largest IPO of the year, and the fact that the investment banks are eyeing further work as the State sells down its remaining 71 per cent in the bank in the coming years.

Morgan Stanley and Goodbody Stockbrokers, as corporate advisers to AIB, also counted among legal, accountancy and other professional firms that shared in a separate pool of €25 million of fees relating to the flotation. The Government paid about €4 million in fees to its financial adviser Rothschild, legal firm William Fry, media advisers and other groups.

Meanwhile, France’s BNP Paribas, US banking giant JP Morgan, TIAA, formerly the Teachers Insurance and Annuity Association of America, and US investment firm Vanguard Group have emerged as the top four companies to disclose investments in AIB since the IPO.

The holdings, which each range between 0.6 per cent and 0.8 per cent of the company, have been disclosed in regulatory filings by the various firms in recent months.

AIB directors have spent about €300,000 on company shares since the flotation.