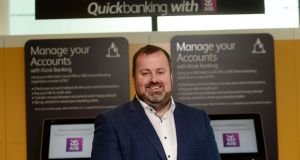 AIB’s head of Irish retail and commercial banking, Robert Mulhall, has said that the Central Bank’s strategy of reviewing its mortgage cap rules on an annual basis may lead to house price distortions as customers try to second guess the regulator.

Speaking in an interview with The Irish Times this week, Mr Mulhall said that while AIB supports mortgage restrictions, introduced in 2015, the combination of reviewing them annually, alongside speculation heading into budgets, can prompt would-be buyers to accelerate or delay plans.

“I think any of that can create an artificial distortion and you want to be careful that it’s not creating artificial pricing impacts in the market,” Mr Mulhall said.

The Central Bank is set next month to conclude the second annual review of its loan-to-value and loan-to-income limits. Last year, the regulator eased borrowing restrictions for first-time buyers, prompting some commentators to say that this has contributed to ongoing house price inflation, currently running at an annual rate of about 12 per cent.

Meanwhile, Mr Mulhall said he expects the fewer than 1,000 of its struggling mortgage borrowers to take up a mortgage-to-rent plan it unveiled last month with the Irish Mortgage Holder Organisation (IMHO) and iCare Housing. Under the scheme, AIB will give iCare €100 million to buy properties, which will be rented back to families who forfeit ownership of the homes and who qualify for social housing, in return for a long-term lease.

It would involve the customer’s residual mortgage debt, following the sale of the property, being fully written off.

“We see [mortgage to rent ] as just another initiative to try and help,” said Mr Mulhall. “We remain committed to trying to keep people in their family homes. It’s not necessarily the solution to all problems.”

He said he expects that iCare will be able to refinance its AIB loan elsewhere in the future.

AIB’s own restructuring over the past four years has seen 7,400 employees leave the bank, many under a voluntary redundancy programme, though the organisation has also hired 4,400 people during the period, resulting in a net decrease of 3,000. It currently has about 10,400 employees.

Mr Mulhall said he expects the company’s workforce to continue to evolve as it adapts to new technologies and enters partnerships with fintech firms.

“The make-up of [AIB’s] workforce is very different to the make-up 10 years ago,” he said, adding that new staff brought on board in recent years “was about hiring the type of staff to future-proof the business”.

He added: “I think the next wave of technology innovation and robotics and artificial intelligence will do exactly the same thing.”