Efforts to resolve financial issues unsuccessful, but depositors will be repaid 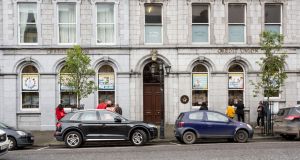 Liquidators have been appointed to Charleville credit union, after an application to the High Court by the Central Bank. Photograph: Liam Burke Press 22

The High Court has appointed provisional liquidators to a Co Cork credit union that has been in a distressed financial position for a number of years.

Charleville Credit Union (CCU) is not insolvent but various efforts since 2007 to deal with its problems have not been successful, the court heard.

Central to those problems was its failure to bring its reserves up to the regulatory requirement of 10 per cent of assets. Its reserves were just 3.5 per cent last June.

The Central Bank, which applied for the winding up order to the court, was also unhappy with its poor lending policy, its costs to income ratio and its overall business model.

Charleville Credit Union’s board condemned the liquidation as unnecessary and draconian.

“An independent audit has demonstrated to the Central Bank’s satisfaction that there are no governance issues in Charleville,” the board said.

“Charleville Credit Union is solvent and its current assets are sufficient to cover its members’ shares. In addition, all members’ deposits are protected by the Government deposit guarantee scheme.”

The board argued that the move would result in the taxpayer paying liquidators’ fees. “We fail to see how this course of action is appropriate or necessary,” it said.

President of the High Court Mr Justice Peter Kelly earlier appointed David O’Connor and Jim Hamilton as joint provisional liquidators on an ex parte (one side only represented) application by Paul Gallagher SC, for the CBI.

The liquidators have been given all the powers of the credit union directors including to carry on business if necessary and to employ or dismiss staff as necessary.

They will have the power to pay depositors from the government-backed Deposit Guarantee Scheme which guarantees all deposits held in a financial institution up to €100,000. There are no deposits in Charleville Credit Union in excess of that figure, the court heard.

The Central Bank confirmed that it has invoked the deposit guarantee scheme.

“Members do not have to contact the credit union or the central bank, as compensation payments will automatically issue by cheque to all duly verified depositors,” the regulator said.

The bank added that the money would be paid as early as possible within the legal deadline of 20 working days.

The Central Bank said that it was conscious that there was a demand for a credit union in the area and was committed to ensuring such a service would be available there.

Mr Justice Kelly gave liberty to the CCU directors to make any application they may wish to the court in relation to the Central Bank winding up providing it is done by Monday next and the case can then come back before the court again on Wednesday.

Mr Gallagher, in his petition the court, said there had been a number of efforts to deal with CCU’s lack of proper reserves since 2007 through engagement with the Registrar of Credit Unions and the Irish League of Credit Unions (ICLU).

The Central Bank requested CCU to comply with its reserves obligations on a number of occasions over the ten years.

Transfer of engagement talks, effectively mergers, with other credit unions had taken place but had not successful, the last one being with Clonmel Credit Union, counsel said.

The ILCU had promised money from its special protection fund to boost reserves once the mergers took place but as they never did, the reserves still did not meet the required level.

The Central Bank was conscious that depositors could get a higher rate of return from other institutions in circumstances where No dividend has been paid by CCU since 2007 and no agm held since 2012, counsel said.

The winding up application was also made in the public interest and in the interest of the credit union sector generally, counsel said.

Counsel said an affidavit from Wesley Murphy, of the CBI, stated bad debt provision at CCU was particularly high and it was in a negative reserve position in 2010 and 2011.

Engagement with the credit union began back in 2007 when the Registrar carried out a report which showed the top 100 loans accounted for 42 per cent of all loans, counsel said.

There followed reports by auditors and further engagement with the Registrar but between 2015 and 2017, there were still problems with the business model as well as with bad debt provision and reserves.

The directors of CCU disputed some of what the CBI was saying and argued it had “worked very hard to achieve the required reserves”, counsel said. CCU also claimed it was hampered in trying to improve its position by the restrictions placed on it by the CBI on its lending practices.

It was quite clear in evidential terms the stability of the credit union was dependent on an orderly wind up and the appointment of a provisional liquidator would also prevent “contagion” - or a run on funds, counsel said.

A meeting had taken place with the directors on Thursday evening and while there was no substantial response, they were surprised the CBI had moved so quickly, counsel said.

Mr Justice Kelly said he was satisfied to appoint the provisional liquidators on the basis of the evidence presented to the court.