Commission yet to reach consensus on insurance scheme after German pushback 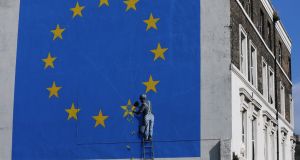 Banking union: A mural by street artist Banksy depicting a European Union (EU) flag being chiseled by a workman on the side of a building in Dover, England, last month. Photograph: Luke MacGregor/Bloomberg.

The European Commission urged political leaders on Wednesday to press ahead with the final element of banking union as it watered down a plan to protect depositors in the event of a future crisis.

In 2012, the commission proposed a banking union that would place the banking sector on a sounder footing and restore confidence in the euro. While the first two of three objectives - integrated banking supervision and a resolution mechanism for ailing banks - have been delivered.

However, the third proposal, a common system for the protection of depositors, has not yet been established, largely as a result of pushback from Germany.

On Wednesday, the commission put forward a plan that reduces the sharing of bank risks and eyes strict conditions that member states must meet before their banking sectors can access deposit safety nets as European Union level.

Ultimately, the commission wants to reach a consensus on a EU deposit insurance scheme which would collect funds from banks across the union to guarantee each depositor to a maximum of €100,000. Currently, protection schemes are run by individual states, capped at the €100,000 level across the EU.

“A complete Banking Union is essential for the future of the Economic and Monetary Union and for a financial system that supports jobs and growth,” said Valdis Dombrovskis, the EU commissioner in charge of financial-services policy.

“We want a banking sector that absorbs crises and shares risks via private channels, thus ensuring that taxpayers are not first in line to pay. Today we are presenting pragmatic ideas to move forward with risk sharing and risk reduction in parallel. We hope that these will be useful food for thought for EU co-legislators to reach consensus on the remaining measures by 2018.”

The next step is for these proposals to be agreed at the political level in the European Parliament and Council of Ministers from each member state.

“The commission is urging them to press ahead with completing Banking Union so that economic progress across the EU can be reinforced,” it said.

1 European Commission to appeal Apple tax ruling on Friday
2 Ireland is in danger of losing the woods for the trees on emissions reduction
3 PTSB names Grant Thornton partner as interim CFO
4 FinCEN Files: Dublin-listed fund sent $23m to firm suspected of links to Russian crime boss
5 Period of ‘extreme stress’ beckons for Irish businesses
6 Over 36,700 employers register for new Covid wage subsidy scheme
7 Coronavirus response must not kill the futures of Ireland’s young
8 Workvivo to create 100 new jobs in Cork as business booms
9 The wealth of the Irish – how do your assets match up?
10 FinCEN Files: Scale of challenge facing financial regulators revealed in leaked documents
Real news has value SUBSCRIBE