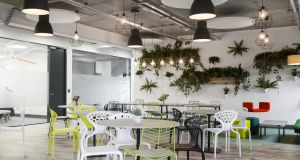 An extension of the Mill Enterprise Hub in Drogheda.

Some 600 jobs could be created if the area surrounding Dundalk and Drogheda if the area is recognised as a cluster for e-payments companies, says a local industry group.

According to M1 Payments Corridor, the indigenous jobs could be created by 2021 if their bid to build the northeast into an internationally recognised cluster is successful.

With that goal in mind, the group has applied for €4 million in funding from Enterprise Ireland to help develop the brand and win out over other counties with established e-payment companies including Cork and Kerry.

Areas around Dundalk and Drogheda have attracted multinational payments companies in the past number of years including PayPal, State Street and Coca-Cola International Services. Following this, an enterprise hub in Drogheda saw an opportunity to brand the north-east as a digital payments zone.

“We examined three or four different sectors and the payments one jumped out,” said Breanndán Casey, business development manager at The Mill - Drogheda’s enterprise hub.

“In the past Drogheda and Dundalk would have been competing with each other, but now there’s a recognition that they need to work together,” he said.

The Mill, itself established only three years ago, “was recognition that we needed somewhere to help start-ups and develop businesses”, according to Mr Casey.

Government agency grants and philanthropic donations from companies operating in the region led to the foundation of The Mill. The hub has been successful in its mission to incubate companies with one such enterprise, Yapstone, now employing over 130 people in Drogheda having started in The Mill with 10 employees.

Another company hoping to “graduate” from The Mill next year is fintech start up Aphix Software. Graham O’Rourke, the company’s chief executive, said The Mill was “formative” in building his company and that without the M1 Payments Corridor, Aphix’s growth would have been slower.

“There’s no way without collaboration from the M1 Payments Corridor that we would have got Enterprise Ireland support,” he said.

“There were other fintech companies in the region that we partnered with early on and that gave us access to their UK customer base which helped us grow a lot faster.”

Mr O’Rourke’s software company currently employs 15 people based out of The Mill.

In addition to creating new jobs in the northeast, the M1 Payments Corridor hopes to use any funding to grow pre-incubator programmes, training programmes and collaboration opportunities between small and medium enterprises and multinationals that have invested in Ireland.