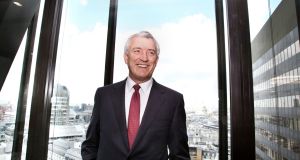 Shares in UK lender CYBG, led by former AIB chief executive David Duffy, plunged as much as 23 per cent to a record low on Thursday after the group warned it now expects to take an additional hit of up to £450 million (€500 million) relating to an industry-wide payment protection insurance (PPI) scandal.

The move has triggered investor concerns about the bank’s capacity to pay a dividend this year.

CYBG, owner of Clydesdale and Yorkshire banks and Virgin Money, has been headed by the Irish man since 2015, when he quit AIB. He presided over its initial public offering (IPO) early the following year.

The group said in a stock exchange announcement after trading closed on Wednesday evening that it has been forced to increase its provisions for legacy PPI costs by between £300 million and £450 million after receiving a surge in complaints and customer inquiries in August.

Last week marked the final deadline for customers to complain about PPI in what is the UK’s most expensive consumer finance scandal, where customers were mis-sold payment protection insurance going back decades. The issue erupted in 2011.

CYBG had already previously ringfenced £2.67 billion to cover customer redress and administrative costs relating to PPI mis-selling. The wider industry has set aside about £50 billion in the UK.

Royal Bank of Scotland (RBS) also alerted the market this week that the debacle will cost it up to £900 million more than previously expected.

“Before today, CYBG seemingly offered the potential to morph into a high-yield [dividend] stock, with management guiding to a 50 per cent dividend payout over the medium term,” said Ian Gordon, an analyst with Investec, adding that he expects that the company will not pay a dividend for the current financial year.

Goodbody Stockbrokers analyst John Cronin said: “We have spoken to the company, and while it is clear that much conservatism appears to have been baked into the upper end of the estimated impact range, one cannot be certain that the outturn will not be worse (and the market is likely to think about the top end of the range as a base case – at best – given previous experience).”

He said that CYBG’s full-year dividend may be in jeopardy, as the additional PPI provisions will cut the bank’s common equity Tier 1 capital ratio – a key measure of a bank’s reserves of money to withstand a shock – to slightly below management’s 13 per cent target.

“If the outcome ends up being worse than what CYBG has estimated, then there is the risk of a capital shortfall,” Mr Cronin said.

Shares in the bank fell as much as 23 per cent to 108.3p in trading on Thursday morning in London.