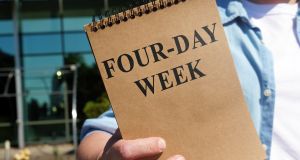 The only people who could possibly be against a four-day week are sceptical employers, workaholics and people who reckon compressing their responsibilities into a shorter time would create more stress, not less. Photograph: iStock

What’s not to love about the push for a four-day work week? There are no flaws in this vision. Indeed, the participants in the Four Day Week Ireland campaign should take no days off until it is achieved.

Using the hashtag #better4everyone, the campaign group – a coalition of trade unions, businesses, women’s rights and civil society organisations and others – wants a public conversation on the case for reduced working hours.

It wants to banish the “false narrative” that working long hours is either good for productivity or some kind of badge of honour.

The group has published the results of Behaviour & Attitudes survey that found 77 per cent of adults would like to see the Government “exploring” the introduction of a four-day week. Why wouldn’t they? A four-day week is, after all, defined as “same job, same goals, same salary, but over four days rather than five”.

Work fewer hours for the same pay? The only people who could possibly be against it are sceptical employers, workaholics and people who reckon compressing their responsibilities into a shorter timeframe would create more stress, not less. Even among employers 46 per cent agreed it was “feasible” to trial a four-day week in their own workplace.

That all goes a long way from saying a four-day week with no loss of pay would ever actually become the norm, or that anyone in the Government would ever have a spare minute to seriously set the tone on this issue by researching it or even applying it to public sector employment contracts.

Nevertheless, the Fórsa trade union, part of the campaign group, has been busy lobbying various politicians on the subject, “outlining” its objectives to Tánaiste and Minister for Enterprise, Trade and Employment Leo Varadkar and the Junior Ministers in his department.

The morale-boosting idea is not unique to Ireland. In the UK general election of 2019, the Labour Party pledged to move to a 32-hour working week by 2029.

Internationally, supporters argue there is little evidence of any dampening effect on productivity, and also that shorter working weeks would act as a buffer to an automation-triggered wave of job losses.

This could be a slow burn of a campaign worth keeping an eye on even if, as Four Day Week Ireland itself cautions, it wouldn’t exactly mean Fridays off for all.