Hunt succeeds Bernard Byrne, who announced his decision to leave in October 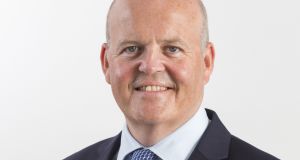 AIB has formally appointed Colin Hunt as its new chief executive, succeeding Bernard Byrne, who announced his decision to leave in October.

In a statement to the Stock Exchange, the bank said the required regulatory fitness and probity assessment and consultation with the Minister for Finance in respect of the appointment had concluded successfully.

Mr Hunt (48) joined the bank in September 2016 as managing director of wholesale and institutional banking,

He previously held positions in Macquarie Capital, Goodbody Stockbrokers, Bank of Ireland and NatWest, as well as spending time as special advisor to former ministers for finance and transport.

“The board are delighted to appoint Colin as the new chief executive of AIB,” chairman Richard Pym said. “This appointment from within our senior team is testament to the calibre of people we have in AIB,” he said.

“ I look to the future with confidence and optimism that under Colin’s leadership AIB will continue to grow and prosper in the years to come,” Mr Pym said.

Sources had said that promoting an internal candidate as AIB’s next CEO was the easiest route, given the pay limitations as well as the notice period and more-lengthy regulatory approval process that an outsider would have to go through.