Challenger bank Starling set to open in Ireland this year 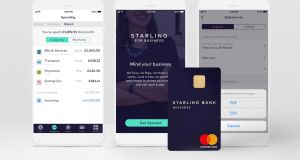 Starling Bank is set to launch in Ireland later this year.

Starling Bank, the UK mobile-only challenger bank, has submitted an application for a full banking license with the Central Bank of Ireland as it readies a launch here later this year.

Chief executive Anne Boden said the bank, which currently has some 460,000 personal current accounts and 30,000 SME accounts in the UK, will “definitely” set up a subsidiary in Ireland later this year to service the Irish market, with a staff of between 10 and 30 people.

It will also then use this Dublin hub to launch into new markets in Europe, most likely France and Germany, having just raised £75 million (€85.4 million) to fund its international expansion.

Starling was launched in 2014 with a vision “to build the best bank account in the world”. A digital-only bank, it operates in a similar space to N26 and Revolut, both of which are rapidly building their presence in Ireland.

“I was quite surprised when I turned up in Ireland in 2012 that Irish consumers paid so much for their banking,” she recalls, adding that day-to-day banking in Ireland is “far more expensive than the UK”.

Now she’s hoping to change this, promising a “free” offering to Irish customers. “Until we announce our pricing, I can’t 100 per cent confirm that, but it is my aspiration to give Irish customers free banking,” she said.

In the UK, Starling’s current account promises spending insights, real-time notifications and payments. It can be opened in minutes and has “zero” monthly account fees.

Starling also expects to offer personal loans and overdrafts in the Irish market, as well as in time, loans to small businesses.

However, offering interest on customers’ deposits – it pays 0.5 per cent in the UK – may not be part of the plan for Ireland.

“The interest rate for euro is quite bad so we haven’t decided whether we’ll offer interest or not,” she said, adding that mortgages are also not on the agenda.

Once the bank receives its Irish authorisation, customers deposits will be protected under the State guarantee scheme, which protects deposits worth up to €100,000.

While Starling will have an operation here, it won’t be a bricks and mortar branch – the bank will operate on a digital-only basis.

“We think the Irish market is particularly receptive to tech and mobiles, as the penetration of mobiles is very high,” Ms Boden said.

Starling is not the only UK digital-only bank looking at a move into the Irish market. Last year Monzo, a UK-headquartered digital-only bank, whose backers include the Irish-led payments group Stripe, obtained passporting permission to allow it operate in the Republic.

It said at the time that the Republic would be “the first step” in its plans for international expansion. However, when questioned, a spokesman for Monzo offered no update on the bank’s plans to enter the Irish market.