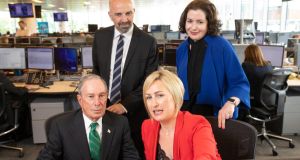 Bank of Ireland said on Monday that Sean Crowe, chief executive of its markets and treasury division and a key figure in the group’s emergency fundraising during the financial crisis, will leave the company at the end of 2020.

The departure comes as the bank is considering the applications of more than 2,000 employees – or almost a fifth of its workforce – who applied last month for a voluntary redundancy package. While the bank had only been officially targeting 1,400 job cuts over the coming years, it is likely that it will let more staff go than originally intended, according to analysts.

Mr Crowe (53) joined Bank of Ireland in 1993 as a financial markets trader. Since then he served in a number of senior executive roles in the markets and asset management areas before becoming group treasurer at the height of the financial crisis in November 2008.

This put Mr Crowe on a key team under then chief executive Richie Boucher, as the bank sold a €1.1 billion stake to a group of North American investors to stave off nationalisation as the Government injected €4.8 billion into the business. The bank subsequently carried out a €1.8 billion complicated debt and equity financing deal in late 2013 to pay back part of its bailout.

The bank has returned more than €6 billion to Irish taxpayers, who continue to have a 14 per cent stake in the business.

“Sean has made an exceptional contribution to the Bank of Ireland group for more than 25 years,” said group chief executive Francesca McDonagh. “This includes as group treasurer during some of the most challenging times in the bank’s history. He played a significant role in helping Bank of Ireland navigate these challenges.”

Mr Crowe has been on the bank’s executive committee since 2014 and Ms McDonagh has taken a decision to divide his responsibilities. Treasury will report from the end of the year to Myles O’Grady, group chief financial officer, while markets will fall under chief executive of corporate banking Tom Hayes’s remit.