Latest bond auction brings to €22.75 billion the amount NTMA has raised this year 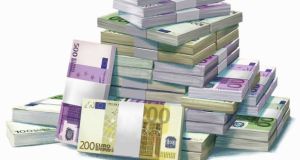 In most cases buyers are paying the Government for the privilege of lending. Image: iStock

The yield on Irish Government debt touched an all-time low of minus 0.4 per cent on Thursday.

The National Treasury Management Agency (NTMA) sold an additional €1.5 billion of bonds, mainly at negative yields, to fund the State’s response to the coronavirus.

This means that in most cases buyers are paying the Government for the privilege of lending, a reflection of the European Central Bank’s massive bond-buying programme.

The 0.4 per cent rate attached to the 7-year bonds was the lowest ever yield at which an Irish Government bond was sold in an auction, eclipsing the minus 0.2 per cent rate hit at a previous auction in July.

The funds will help finance the Government’s response to the coronavirus crisis, which is expected to result in a budget deficit of €25 billion this year.

The latest bond auction brings to €22.75 billion the amount the NTMA has raised on the long-term debt markets so far this year. In May, it set a funding target of €20 billion to €24 billion to help deal with the cost to the exchequer of the pandemic.

The agency had originally only planned to raise €10 billion to €14 billion this year.

The ultra low yields on Irish debt caps a remarkable turnaround for the NTMA and Irish bond markets, which saw yields soar above 14 per cent during the height of the sovereign debt crisis less than a decade ago.

Greek and Italian bond yields have also performed strongly since the coronavirus crisis as central bank stimulus inflates the price of safer assets. The rally is “consistent with the collapse in credit and term premia across European rates markets, and with rising expectations of ECB easing,” said Antoine Bouvet, senior rates strategist at ING Groep NV in London. “The trend is your friend.” The Irish Government expects public debt-to-GDP to rise signficantly in 2020 before declining again in 2021.