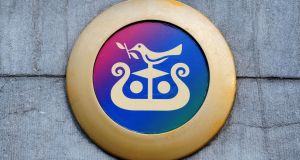 AIB has already been charging negative rates to many businesses with over €3 million on deposit. Photograph: Aidan Crawley/Bloomberg

AIB told customers on Monday it is changing the terms and conditions of deposit accounts for “micro-businesses” to allow it impose negative rates on such customers in the future.

The lender also signalled it is moving already-minimal rates on a raft of personal savings accounts to zero from January 12th.

AIB, which has already been charging negative rates to many businesses with over €3 million on deposit, is now moving to capture all customers above this threshold, with a number of high-net-worth individuals set to be charged for the privilege of saving with the bank for the first time.

Formalising the €3 million cut-off point will affect up to 1,000 business customers and wealthy individuals.

The bank is understood to be planning to lower the threshold to €1 million next year, which will impact thousands more depositors. Customers will be given 60 days’ notice of any rate changes, under Central Bank of Ireland rules.

About 40 micro-businesses, which have fewer than 10 employees and annual turnover of less than €2 million, will be affected by a policy of imposing negative rates on accounts with more than €1 million, according to sources.

Banks in the Republic and across Europe have, for some time, been widening the net of customers being charged what are known as negative rates on deposits. This is because the European Central Bank (ECB) has imposed such charges for the past six years on surplus cash banks deposit with it.

The ECB deposits rate stands at minus 0.5 per cent. The policy has been part of an effort by the ECB to get banks to lend more in order to boost the economy – albeit with limited success.

It emerged on Monday that the Bank of England has moved a step closer to adopting negative interest, after writing to banks asking them how ready they would be for what would be ground-breaking move in the UK.

A spokesman for AIB said 99 per cent of the group’s customers have been shielded “during a sustained period of European negative rates”. He declined to comment on what percentage of the group’s deposits book, which stood at €75.7 billion in June, is currently affected by negative rates, or would be impacted by a lowering of the threshold.

AIB saw a net inflow of €4 billion of deposits over the first six months of the year, echoing a development across the banking sector, as nervous households and businesses set aside more savings as a result of Covid – and because they had limited opportunities to spend during the lockdown.

The bank currently has only €77 out on loan for every €100 it holds on deposit, a reversal of the situation seen during the financial crisis, when Irish banks were over-reliant on bond markets for funding and lost tens of billions of euros in customer deposits.

Still, excess deposits have thrown up their own problems for banks as they struggle with negative central bank rates and muted demand for new lending.