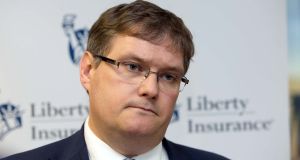 Liberty Mutual executive Tom McIlduff has been poached by the new US owners of AA Ireland to take over as chief executive of the roadside and assistance and insurance intermediary. File photograph: Gareth Chaney Collins

The new US owners of AA Ireland have poached senior Liberty Mutual executive Tom McIlduff to take over as chief executive of the roadside and assistance and insurance intermediary.

The deal marked an exit for Carlyle Cardinal Ireland Fund and Carlyle Global Financial Services Partners, which acquired the business for €156.6 million as it was spun off by UK-based AA plc in 2016.

Current AA Ireland chief executive Brendan Nevin will remain at the helm of the business for a transition period that will come to an end during the first half of next year, staff at AA Ireland were informed on Thursday.

Mr McIlduff, a native of the North, is currently chief executive of Western Europe markets for Liberty Mutual’s Liberty Insurance, based in Madrid. He was previously head of Liberty Insurance in Ireland between 2015 and 2017.

Prior to that, Mr McIlduff worked or Boston Consulting and Bank of Ireland.

Mr Nevin has been head of AA Ireland, which employs almost 500 people, for the last 10 years and oversaw the successful carve out of the business from AA plc.

Olivier Sarkozy, the former head of Carlyle Group’s financial services unit, is best known in Dublin financial circles for being involved in that group’s part in a consortium of private equity firms – known as Mallabraca – that had looked briefly at taking a major stake in Bank of Ireland in 2008, at the start of the financial crisis.