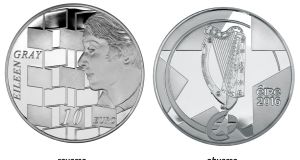 Some 6,000 of the Eileen Gray coins went on sale last November at a cost of €60, and about 2,000 have since been sold. The coins come in a presentation box with a certificate of authenticity, and are struck in .925 sterling silver.

The Central Bank is offering purchasers of the €10 silver proof Eileen Gray commemorative coin the option of getting their money back after a blemish was discovered on some of the coins.

It’s understood that some of the coins, which are manufactured by a UK based company, have a slight blemish, or cloudiness, a characteristic not associated with proof quality coins.

“We have received some limited customer feedback about the condition of this commemorative coin. We wish to assure our customers that we take this feedback very seriously and will offer them a refund or replacement of their Eileen Gray commemorative coin. People may also wish to retain their coin,” according to the Central Bank.

Some 6,000 of the coins went on sale last November at a cost of €60, and according to a spokeswoman for the bank, about 2,500 have since been sold. The coins come in a presentation box with a certificate of authenticity, and are struck in .925 sterling silver.

The coin, the first collector coin to commemorate the achievements of an Irish woman, is the first in a new five-year Europa Star silver coin programme commemorating the ‘Ages of Europe’. The 2016 theme is ‘Modern 20th Century Europe’ and is inspired by the architectural designs as featured on the €500 banknote.

Born in Enniscorthy in 1878, Gray is one of Ireland’s foremost designers, perhaps most well known for her iconic sidetable. A pre-eminent figure within the Modernist movement, she spent most of her life in France.

Over the years many runs of collector coins at the Central Bank have sold out, including a €10 silver coin to commemorate EU englargement which was for sale in 2014. It had an issue run of 50,000 and was sold for €30.