Central bank allocates 28 out of 170 new staff to Brexit

Regulator says headcount for the year end would be close to 1,620 employees 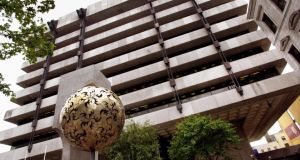 The Central Bank had issued €12 million in fines in 2016, the largest annual amount it had ever levied against firms. Photograph: Matt Kavanagh

The Central Bank of Ireland allocated 28 out of 170 new full-time staff at the end of last year to address Brexit-related issues. *

This has emerged from the minutes of the meeting on December 12th of the Central Bank Commission, which is responsible for ensuring that the regulator’s statutory functions are properly discharged.

According to the minutes, some 38 staff were allocated to matters relating to Brexit, risk management and other work identified by the governor Philip Lane, with 132 to the heads of the main divisions within the financial regulator’s operation.

Gerry Quinn, the Central Bank’s chief operating officer, told the commission that its headcount for the year end would be close to 1,620 employees. Some 154 roles were in the “active stage” of recruitment at the end of November.

Anne Marie McKiernan, the registrar for credit unions, cited a declining loan-to-asset ratio with savings growing faster than net lending, which was “impacting on future viability”.

“The overall assessment was that the sector was not likely to recover significantly further, without more transformation,” the minutes stated. “The biggest concern was the future viability of credit unions, especially under stress scenarios.”

One of the commission members raised concerns about individual credit unions moving into large-scale lending such as mortgages. The commission heard that it had been made clear to credit unions that there would be a requirement to fully understand the impact on balance sheets, and the standards expected were wider than the sectors’ regulatory framework alone, with a range of additional EU and domestic legislative and regulatory compliance challenges.

The minutes also noted that the Central Bank had issued €12 million in fines in 2016, the largest annual amount it had ever levied against firms.

The governor noted that addressing non-performing loans (NPLs) remained a “priority” for the Central Bank and “much progress” had been made on the issue. Across the Irish banking sector, NPLs had declined from 57 per cent at their peak in 2013 to 17.3 per cent of all loans. This is still well above the average across the euro zone.

The commission was informed that the costs of relocating the Central Bank’s staff to new offices in Dublin’s docklands was within the €140 million budget for the move. The governor approved the drawdown of an agreed contingency for this programme but the amount was not specified.