Caveat: Firebreak between bank failures and public bailouts still does not work

‘Even if we had known that the banks were bust on the night of September 29th, it is not obvious what we could have done’ 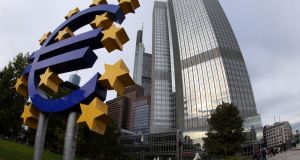 ECB headquarters in Frankfurt, Germany. Looking back at the government’s decision to guarantee the Irish banks 10 years ago, with no help forthcoming from the ECB, taoiseach Brian Cowen was left with no good options

One of the great failures exposed by the 2008 financial crisis was that the tools were not available at either a national or European level to the political decision-makers to deal with an orderly breakdown of bad banks.

International flows of capital from the time of the creation of the euro zone and the increasing globalisation of financial markets, far from reducing the risks to financial institutions, in fact magnified them.

To avoid a banking collapse that had the potential to send a financial tsunami through global money markets – as Wall Street firm Lehman Brothers did a decade ago (or even the potential impact that a chaotic failure of Anglo Irish Bank might have had in Europe) – strong, co-ordinated international regulatory oversight is required.

In other words, if banks live across borders their regulators must too. In this way, in the event of their death, they can be buried with as little disturbance as possible, particularly to governments and national purses.

The EU’s post-crisis creation of the Single Supervisory Mechanism, a banking watchdog within the European Central Bank, and the Single Resolution Mechanism to manage the wind-down of lenders aim to cover these roles.

While the architecture has been set up, it has yet to be tested on an EU-wide basis. And where it has been invoked at a national level, the new systems have shown that the firebreak between bank failures and public bailouts still does not work.

The EU-wide watchdog was criticised last year for its handling of the failure of two Italian banks, Veneto Banca and Banca Popolare di Vicenza, which were bailed out with €17 billion of public money.

These state rescues ran roughshod over the new Bank Recovery and Resolution Directive, the EU rules designed to resolve bad banks in a manner that was supposed to protect taxpayers from bank failures by making bank creditors liable for losses, including the senior bondholders that the Irish government was ordered not to burn.

Italy showed there was still a legal gap in the new regime for national governments to step in to save banks. In that case there was a concern that the high level of non-performing loans could cause contagion to some of the country’s bigger lenders.

Two key pieces of the so-called banking union that are supposed to avoid a repeat of the 2008 crisis are still missing: a European deposit insurance scheme and regulating bank exposures to sovereign debt.

Germany is dragging its heels on the insurance scheme as wealthier banks in large countries are concerned they could end up bailing out weaker competitors. Essentially, the money of German savers could be used to rescue European banks.

“Regulatory reactions to a crisis like this are always to plug where the leaks developed the last time. It would be extraordinary if the same sort of problem arose,” said former Central Bank governor and ECB board member Patrick Honohan, who was brought in to the regulator after the financial crisis.

He points to the loan-to-value restrictions on lending, and the requirements for banks to hold bigger buffers of cash and debt against losses as changes designed to avoid a repeat of the crisis of 2008.

“There have been banking crises and crises in the financial sector repeatedly in countries over the years, and it would be foolhardy to say that nothing could go wrong,” he said.

In a presentation to a conference in Galway last week, Honohan put the net cost of the banking crisis to the Irish public at €37 billion (out of the upfront €64 billion that was pumped into the banks) compared with the €14 billion in losses junior bondholders incurred in the crash. The others to bear losses were Irish bank shareholders (€29 billion) and foreign bank shareholders (€28 billion).

Looking back at the government’s decision to guarantee the banks that night 10 years ago, in the absence of a national bank resolution regime, despite tentative attempts to draft legislation setting up one in early 2008 after Northern Rock’s failure in September 2007, and with no help forthcoming from the ECB, taoiseach Brian Cowen was left with no good options.

“There never are,” said ex-IMF official Donal Donovan. “Guarantees are horrible things. Everyone knows there is a cost. Even if we had known that the banks were bust on the night of September 29th, it is not obvious what we could have done. We would still have the same dilemma: let the banks fail or pump €64 billion in.”

Alan Dukes, who inflicted losses on Anglo junior bondholders in the years after the crisis as chairman of Irish Bank Resolution Corporation, the wind-down vehicle that started the shutdown of that bank, said he did not see the government having that option of imposing losses on bondholders on the night of September 29th-30th 2008. The risk of contagion to the flow of funding to the other Irish banks was too great at the time.

Dukes believes that the State’s bailout of AIB and its disastrous investment in insurer ICI in the mid-1980s may have encouraged the view that the bank took on the night of the guarantee in September 2008 when it lobbied the government to step in to address Anglo’s failure for the sake of the wider financial system.

“I don’t think AIB ever learned from that,” said Dukes, who was minister for finance at the time of the ICI bailout. “That attitude that this was a problem for the government, not a problem for the bank – that permeated a lot of the bank thinking after that, and it was certainly part of their thinking in the 2000s.”

Honohan believes the last banking crisis could break that view that the government will always have the backs of the banks or another systemic industry should it ever find itself in trouble.

“The afterword of this guarantee might be the opposite: it has caused so much pushback that the government would be slower next time to step in and rescue some entity that was misbehaving.”

Economic history has shown that crises can, and will, happen again and again.

“Financial bubbles are part of the financial landscape,” said Antoin Murphy, now retired Trinity College economics professor who wrote a book on the causes of the Irish banking meltdown with Donovan.

“There is always this incredible tension between financial innovation and prudence. Financial innovation can produce an amazing amount of economic good for society but at times the innovation gets out of line with prudence and when that happens you get a bubble.”

Murphy believes the Central Bank has become more professional in its monitoring of the banks, but warns against excessive regulation that might hamper innovation that could benefit the economy.

Honohan sees cyber risks as holding the potential for another financial crisis.

“That’s a big hole. Banks and technology companies have this characteristic that they are reliant on very complex systems of software that sometimes break. We know that. We have seen instances of that. If they can break, they can be hacked.”

10 Garmin Enduro: Built to last and crammed with features